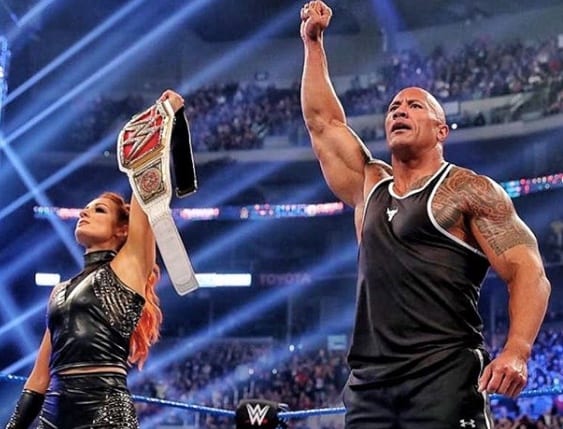 The appearance of The Rock on SmackDown’s big FOX debut helped the show to draw in just under four million viewers, which should hardly come as a shock given the overwhelming influence that The Great One has on the world of professional wrestling.

His segment, in itself, received mixed reviews. Rock paired up with Becky Lynch to go toe to toe with King Corbin, and while it was fairly amusing, the biggest criticism of all was that the whole thing went on a little bit too long for the WWE Universe’s liking.

Still, money talks and you can bet that FOX were happy with the results that their investment produced last night. One man who was also happy, quite clearly, is The Rock himself.

Receiving the seal of approval from someone like him is always going to be a great sign, as Becky continues to rise up through the ranks of WWE with each and every passing week.

It’s quite clear to see that this surge that Lynch appears to be on is reaching every single corner of the mainstream media, too, with New England Patriots star Tom Brady even liking Rock’s post about her on Instagram.

Following her win over Sasha Banks inside Hell in a Cell last night, a lot of fans are being left to wonder what could be next for the Lasskicker. She has pretty much cleaned out her division, with one of the big lingering questions being whether or not she will take on a returning Ronda Rousey anytime soon.