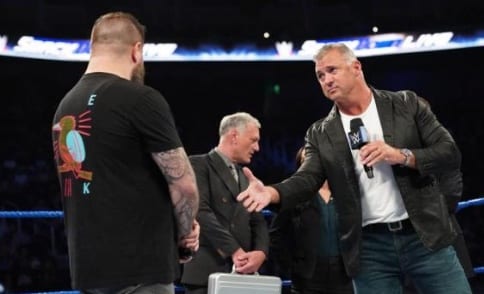 As seen on Sky Bet, the betting odds for Kevin Owens vs Shane McMahon on the first episode of SmackDown Live’s FOX era have been released.

This feud, in one way or another, has been ongoing for over two years now. Shane and Kevin seem to have a natural chemistry with one another and while the roles have been reversed in terms of the babyface/heel dynamic, the quality of the output from both men has been the same.

Now, it appears as if it’s all going to come to an end as Owens and Shane square off with the loser being fired from WWE – for now, at least.

Owens is the clear favourite to walk away as the winner of this high stakes ladder match with odds of 1/5. Shane is the big underdog in this one, currently priced at 10/3.

The obvious choice would be for Kevin Owens to win and begin his climb back towards the top of the card, whether that be on RAW or SmackDown Live – depending on where he ends up during the upcoming WWE Draft.

With that being said, you never can count a McMahon out of any match. Shane has had a lot of bright moments during his second run with the company, but a lot of fans are tired of his work as a cocky, authoritative heel.

Regardless of the momentum that has been won and lost between the two superstars over the course of the last few months, the one thing that we all know for sure is this: if the feud drags out beyond Hell in a Cell, a lot of fans aren’t going to be happy.