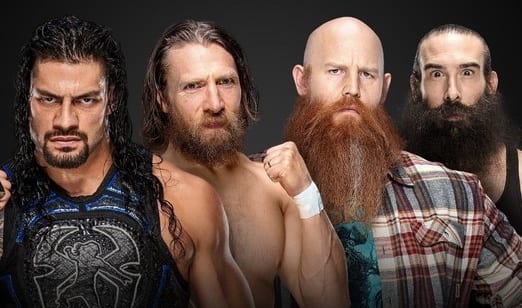 As seen on Sky Bet, the betting odds for Daniel Bryan & Roman Reigns vs The Bludgeon Brothers at WWE Hell in a Cell have been released.

The development of this rivalry over the course of the last few months has been one of the major talking points on SmackDown Live, and with a new era for the show coming up within the next few weeks, all four of these men have a huge opportunity ahead of them as they attempt to lay it all on the line at the upcoming Hell in a Cell event.

The reunion of The Bludgeon Brothers has been one of the most intriguing aspects of this tale, but in addition to that, seeing Reigns and Bryan collaborating with one another is a different flavour that many fans have enjoyed seeing.

In terms of the odds, Bryan and Reigns are currently the runaway favourites with odds of 4/11 to win the match. Erick Rowan and Luke Harper, on the other hand, are 2/1 underdogs to have their hands raised.

Promoting The Bludgeon Brothers as a force to be reckoned with seems like the right way to go with this feud, but at the same time, Reigns and Bryan could do some serious damage in the tag division – if WWE decides to keep them together as a partnership, that is.

While the match itself is fascinating, seeing what happens in the aftermath is going to be all the more interesting with the FOX era being on the horizon for the blue brand.