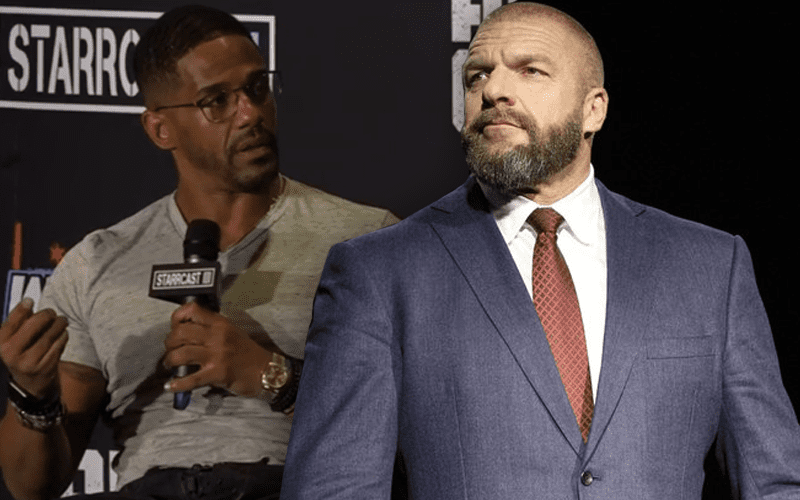 WWE has made a lot of interesting decisions and sometimes, that can really step on plans that a Superstar has for themselves.

During the Wrestling With Stereotypes panel at Starrcast III, Fred Rosser, better known as Darren Young gave his two cents on Triple H.

“I have a love/hate relationship with Triple H. He’s one of my favorite childhood wrestlers in my childhood room in Jersey I still have posters of him hanging up.”

He then discussed the fact that his last feud in WWE was against The Miz. Darren Young had Bob Backlund as his manager at the time and he wanted to use Backlund’s Cross Face Chicken Wing submission, but Triple H wouldn’t let him.

Young said the idea to pair him up with Bob Backlund was his idea and Vince McMahon gave him an opportunity.

“The most intimidating thing about Vince McMahon is his office door. Once you get through it you just gotta do your thing.”

Then Rosser revealed that he received devastating news when “Triple H told me I couldn’t use the Cross Face Chicken Wing because it’s a dangerous hold.”

Young ensured The Game that he could do it safely, but he still didn’t receive the okay to use the move. “He said ‘try doing that to Randy Orton’ because Randy has a bad shoulder. I’m a grown man and I’m crying.”

Then later on, Darren Young discovered that they were saving the Cross Face Chicken Wing for Asuka. He knew it which he exclaimed at the time, but it didn’t fix the tough hand he was dealt in WWE.