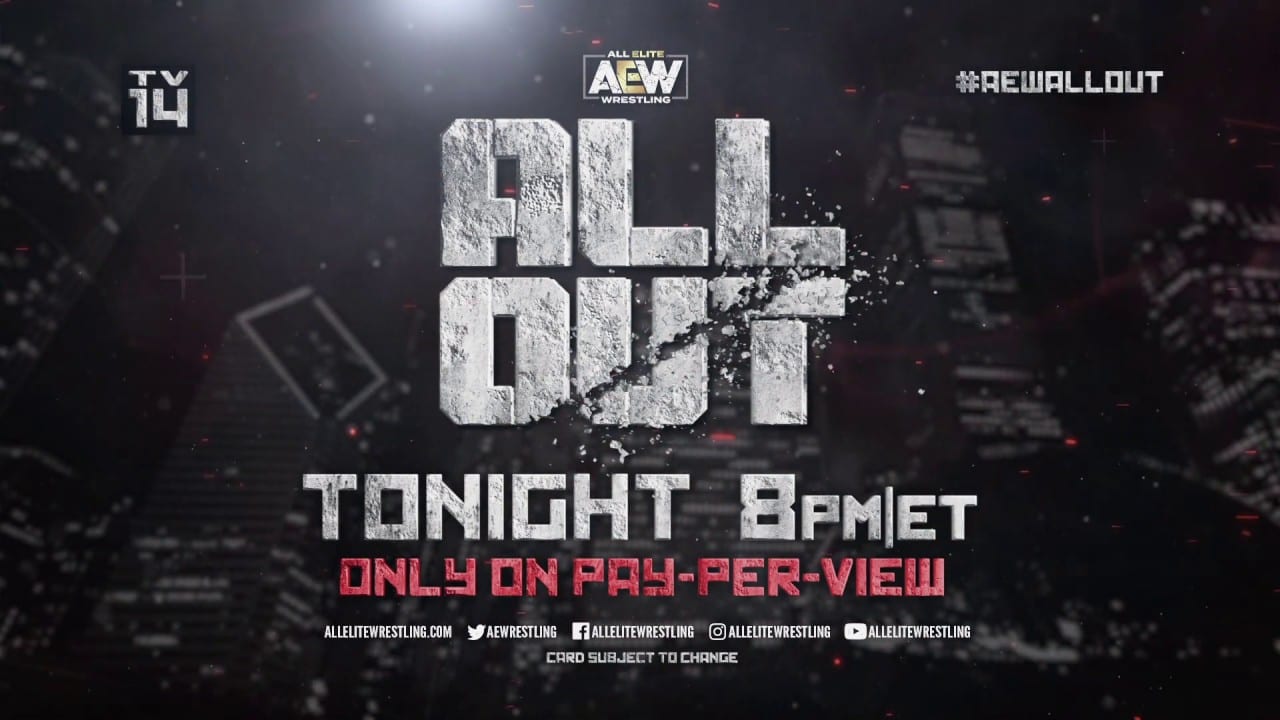 Welcome to Ringside News‘ coverage of All Elite Wrestling’s All Out pay-per-view. The show kicks off at 7:00 PM EST so check back then when the action starts.

It should be a great show in Chicago’s Sears Centre tonight. The first-ever AEW World Champion will be crowned in a contest with Chris Jericho vs. “Hangman” Adam Page. If that doesn’t catch your attention, there are plenty more matches to be excited about.

Jon Moxley cannot wrestle at the show in his scheduled match against Kenny Omega, but they got an amazing replacement. Pac will be filling in to make his official AEW debut to face Kenny Omega.

The AAA Tag Team Titles will also be determined in a ladder match with The Young Bucks vs The Lucha Brothers. Every time those two teams of brothers step in the ring magic is bound to happen.

Cody Rhodes and Shawn Spears will also have a grudge match with a lot of history behind it. We will also get closer to crowning new titles as matches to determine future matches for AEW’s Women’s and Tag Team Titles are also scheduled.

THE BUY IN
Private Party vs. Angelico And Jack Evans

Check back here at 7PM ET for our live play-by-play coverage of the event.

The Librarian was taken out early, but Avalon put books under her feet allowing her to walk around the ring while stepping on the books, but she wasn’t eliminated.

Then Nyla Rose eliminated everyone in her suite until The Librarian tried to jump her. She got thrown out.

Diamonds out next. Shazza McKenzie, Britt Baker, Penelope Ford, Big Swole, Sadie Gibbs. This was a good suite. Shazza was pulled out early as Britt Baker had her hand in her mouth like a mandible claw.

Swole and Nyla Rose faced off until Rose grabbed Big Swole and brought her to the apron. Then Rose slammed her on the apron to eliminate her.

The action continued and then another set came down with Allie, ODB, and more.

Finally, the joker came down just as Awesome Kong was eliminated. The joker was Mercedes Martinez. She got a huge pop.

They continued and Bea Priestly eliminated Sadie Gibbs then Martinez was eliminated by a pair of kicks from Baker and Bea. The final three were Nyla, Britt, and Bea.

Rose was sent over the top, but she held on and nailed a kick to both of them. Baker hit a Canadian Destroyer on Bea, but she couldn’t eliminate her. Then Britt tried to eliminate Nyla and hit a superplex.

Britt eliminated Bea and then Britt was jumped over by Nyla as Priestly pulled her over the top rope. That wasn’t fair at all.

This was a very fast-paced match as soon as they felt each other out early on.

They matched flips and counters and then tagged out to do the same. Marq Quen and Isiah Kassidy tagged out well and ended up gaining an advantage on Evans. Then Evans fought them off and hit a springboard corkscrew kick to Kassidy.

Angelico got the tag and he hit a double team double stomp off the top rope for a two count. Then Evans took the tag again, but Quen turned it around eventually.

They continued until Private Party hit poison ranas all around and then they nailed their Gin & Juice finisher for the win.

Evans and Angelico shook hands with Private Party after the match. Then they turned on them and beat the winners down. The crowd chanted “Party Poopers” at Angelico & Evans as they left.

They aired a promo for Wardlow and that is exciting.

SCU got to cut their promos. Daniels threw in a great mention about selling out for All In and now there’s a new deck, it’s been shuffled, and now AEW is All Out.

Jurassic Express out next and Luchasaurus got a new intro that was pretty sweet.

This match escalated to a spot where everyone got dives to the outside followed by Luchasaurus hitting a dive as the capper. Then Jungle Boy and Christopher Daniels continued. Scorpio got the tag and then traded out to Kazarian who took control on Jungle Boy.

Sky hit a double stomp on Jungle Boy before tagging Daniels who just chopped Jungle Boy down. Daniels trolled Marko Stunt with some flossing and then tagged Kazarian who hit a double team move for a two count.

Jungle Boy took some elbow and kicks and a dropkick to the corner. He came back with a clothesline to Daniels and makes a tag to Luchasaurus. The wrestling dino was a very hot tag and he lit everyone with kicks.

Luchasaurus impressed everyone with his agility before chokeslamming Kaz and then doing a standing moonsault for a two count. He’s a star.

Jurassic Express pulled a triple team hand-off move that ended with Marko hitting a DDT before the pin was broken up. Then SCU jumped Luchasaurus and hit a Celebrity Rehab.

They ended up outside of the ring where SCU hit dives and then they rolled in Marko and Jungle Boy where Kaz hit the Best Meltzer Ever on BOTH of them for the win.

After the match was over, all six competitors raised each others’ hands and hugged.

They started out by trading grapples and then they did some taunting. They had thirty minutes.

Pac was using some classic heel tactic and he had Kenny Omega scouted well. Omega went for an Atomic Crusher, but Pac reversed into a flip to his feet. Omega was going for the Rise Of The Terminator dive, but Pac reversed.

Then Pac went outside and Omega went for a plancha, but Pac booted him in the chest.

They brawled on the outside for a bit after that and Pac got sent into the guardrails. Then Omega took a shot on the apron.

They moved to the inside and Pac continued his assault. Then he nailed a punishing dropkick, but he didn’t go for the pin.

Omega regained control on the outside and then he hit a missile dropkick to the back of the head followed by a fisherman’s buster for a two count.

Pac went off the ropes and Omega caught him to hit a rolling fireman’s carry followed by a splash, but Pac hit a DDT for a two count. Pac’s left thigh was taped up very badly after that really bad injury. Jim Ross said he gashed his leg open on a faulty ring while in Japan.

They continued and Pac revered out of a One Winged Angel before Omega turned it into a German Suplex for a near fall. Kenny went for the Tiger Driver 98, but Pac blocked it and Omega was selling his side.

Pac jumped on the apron and hit a flying cutter and then Omega kicked out of a pinfall attempt. Kenny was placed on the top rope and then he dropped Pac across the top turnbuckle before hitting a snap dragon suplex and a V Trigger for a two count.

Pac blocked another V Trigger and landed two kicks before Kenny ducked a third. Then Pac kicked him in the face and Omega landed a running knee before hitting another one.

They started trading shots in the middle of the ring and then Omega landed a knee. He went for the One Winged Angel again, but Pac countered with a Brutalizer submission hold.

Pac put Kenny Omega to sleep with the Brutalizer. The crowd was STUNNED.

Havoc went out first and started getting toys. Then he grabbed a staple gun and stapled himself to get a “You sick f*ck” chant from the crowd.

Janela held Havoc in a chair while Allin taped Havoc to the chair. Then Allin took some thumbtacks and put them in Havoc’s mouth before taping it closed.

Then it was Janela and Darby. Allin hit a rana and then climbed up top. Havoc asked him to dive on him so Allin did. That destroyed Havoc and the chair he was taped to.

Then Joey Janela hit a sick move on the apron that sent Darby Allin crashing to the ground. Janela set up a table and then Havoc threw thumbtacks in Janela’s eyes before chopping him and smashing him into the ring steps.

They returned to the ring where Havoc gave Janela paper cuts and then stapled his forehead. He flipped him over and he landed in the chair. Havoc stapled him again and then Janela hit a buster on the chair.

Suddenly, Darby Allin was on the apron and Janela landed a flipping powerbomb through the table. Then Janela went to the other side of the ring and landed a flip off the top rope to the floor where nobody was home.

Havoc hit Janela with a tray of biscuits (Cracker Barrel sponsored this match) and then they rolled a big Cracker Barrel barrel down to the ring.

Janela nailed another running clothesline. Then Allin came in with a skateboard with a bunch of tacks glued to it. Havoc took a shot and then Allin landed an ollie with the tackboard off the top onto Janela. Now Joey has tacks in his back.

Allin dove on Havoc and they went through a table. Then Allin placed Havoc on the steel steps, Darby grabbed a Cracker Barrel and he did his coffin drop dive into the barrel, but Havoc moved so Allin imploded the barrel.

Then Janela hit a suspended DDT on Jimmy Havoc before climbing to the top. Janela hit a nice Macho Man elbow drop dive for a two count.

Janela brought the barrel back in and then Havoc hit a superplex and an Acid Rain Maker through the barrel for the win.

Best Friends vs. The Dark Order

Taylor started this match and he soon found himself fighting off both Dark Order members which he did. Then The Best Friends hugged and everyone cheered.

Evil Uno creeped away from Trent and then Uno caught him from the apron which helped Grayson dropkick him into the barricade.

The Dark Order continued their advantage on Trent as they tagged in and out. They hit an Ensuguri/ kick combo for a two count.

Then Stu taged Uno in and screamed, “I want him to die!” Jim Ross said, “That’s an HR issue.” Trent didn’t die, but instead, he got to Chuck Taylor for a hot tag.

Chuck sent Stu over the top rope and hit a dive on the Dark Order. Then Taylor was held by Uno so Grayson could stomp him.

The Best Friends hit a couple of back elbows to the corner and then they hit a double team Ace Crusher for a two count. Uno took out Trent and Grayson hit a dive on Taylor and all the creepers. Then Uno hit a senton on Trent for a two count.

The Dark Order hit a Senton/450 combo for another two count. The Best Friends returned fire and tried to gain an advantage on Evil Uno as Stu got tagged in. Suddenly Taylor hit a piledriver, but Uno pulled him out as Rick Knox was counting to three.

Then The Dark Order hit a Fatality on Trent for the win.

The Dark Order were about to do a beat down and then the lights went out. When they came back on, Orange Cassidy was in the ring. He hit a dive on the creepers with his hands in his pockets. Then The Best Friends hugged Cassidy.