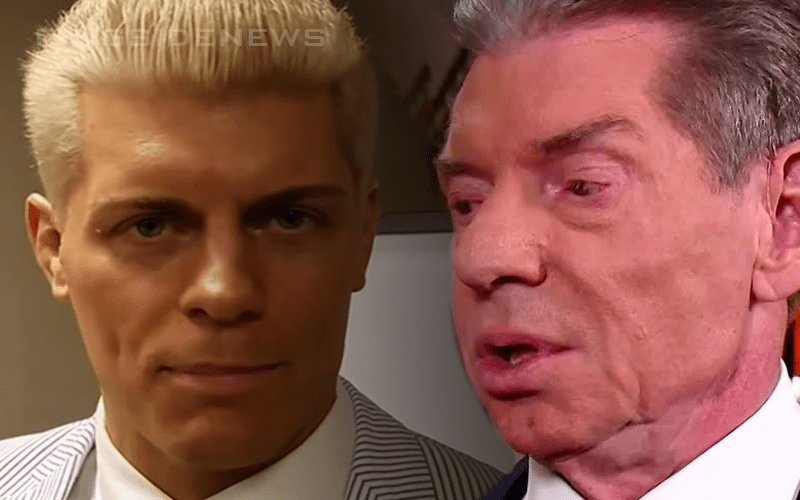 Cody Rhodes wanted to be a star player in WWE, but he ended up leaving out of frustration. Now he is able to look back and see how his relationship with Vince McMahon might have been different from most because of his family’s history with The Chairman.

During his show at Starrcast III, Cody Rhodes went into detail about how Vince McMahon perceived him. Cody said that he is different from his family in a lot of ways.

Rhodes first received his push because he was Dusty’s son, but Cody wanted more. He couldn’t sit around and wait for that deserved push to come either, so he sought out his own fortunes.

“I want to be the star player. I want to talk to you and know you. It’s really weird when you’re trying and trying and trying, and you just don’t click. It’s okay that my dreams, it’s okay that they changed. Because the product changed [in WWE]. There was a time where if you were on a live event, and you tore the house down, Arn Anderson took that report to Vince and he told him. Monday, you were on TV.”

“You had earned it. Now, I’m not saying that’s not the case, but it didn’t feel like it was the same. I got tired of wanting him to hit the ball back when I knew there was more to do. Why try to impress one guy when you have the whole world to impress. I don’t think he’s ever going to like me as a wrestler or a man. I don’t give a damn. It’s out of respect. It’s your opinion, great. Why try for this one guy?”

Vince McMahon knew Dusty Rhodes and Goldust, therefore, he thought he knew how Cody would be. The thing is, Cody Rhodes is unlike his brother and father in many ways, but Vince McMahon didn’t know that he should change his approach with Cody.

“I think a lot of folks may assume that. I think he had a great relationship with Dusty and [Goldust]. I think he thought I was the same and that I would like the same things. I am nothing like either of them. I think [Vince] thought I would have the same rapport. But no, I’m a different person.”

Now Cody Rhodes is a star player in his own pro wrestling company leading AEW into the Wednesday Night Wars as an Executive Vice President. Things are very interesting in professional wrestling right now and it might have ignited in a way because of how Vince McMahon treated Cody Rhodes.