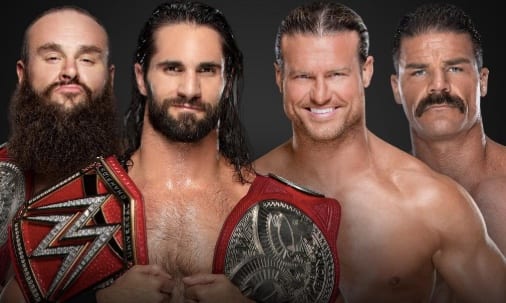 As seen on Sky Bet, the betting odds for Seth Rollins & Braun Strowman vs Dolph Ziggler & Bobby Roode at WWE Clash of Champions have been released.

The idea of Seth and Braun pulling double duty certainly seems more than just a little bit strange, as they’re going to be facing one another later on in the evening with the Universal Championship being on the line.

Some people probably like the idea, but either way there is a lot of uncertainty amongst the WWE Universe regarding how successful this booking strategy is going to be – especially with both men playing the role of cookie cutter babyfaces at this moment in time.

Prior to their Universal Championship showdown later on in the evening, Strowamn & Rollins are actually the underdogs in this match. They are priced at 6/5, whereas the makeshift team of Dolph Ziggler and Bobby Roode are 8/13 odds on favourites to walk away as the RAW Tag Team Champions.

We’re really intrigued to see what kind of a dynamic there is going to be between the two teams, mainly because neither of them are natural partners.

Plus, you have to wonder how much energy the two main event (presumed) guys are going to reserve ahead of what is bound to be a really physical title match later in the night.

We should be in for an entertaining match on some level, but we are curious as to how they end up losing this match and the titles – if they do lose.