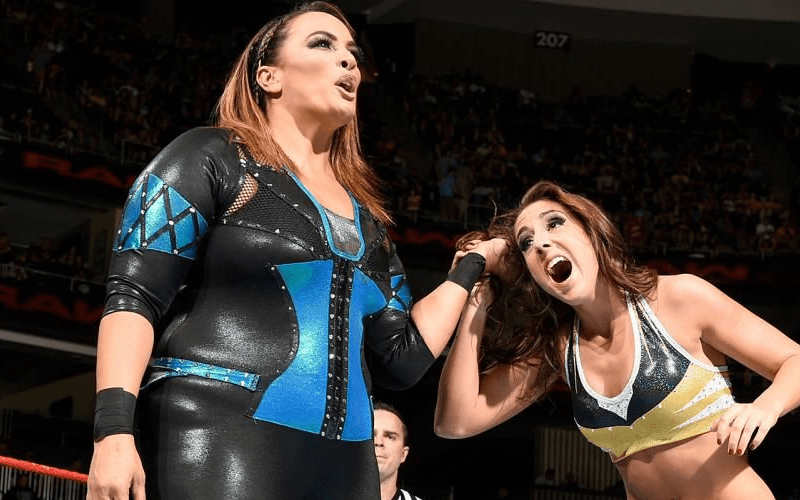 Britt Baker worked very hard making her way through the indies on her way to AEW. She even made a stop by WWE RAW during that time where she lost a squash match to Nia Jax.

The Irresistible Force was just making a name for herself in WWE at the time and she was running through enhancement talents. As Britt Baker spoke to Fightful, she discussed how nervous she was about this match and the amount of pressure that was on her to look good while taking a beating on live television.

This was also a huge deal for Britt Baker because that July 25th, 2016 match was also Nia Jax’s WWE main roster debut.

“That was probably the most anxious I’ve been in my entire life. At the time I had done a couple of the spots for extra work before. It was very uneventful for women. A lot of the men extra talent would get used for security spots, to get beat up, or just the random stuff. The girls, we kind of just sat around and watched in catering all day.”

“That night, the referee John Cone pulled me aside and said ‘I think you’re going to be wrestling Nia Jax tonight. I thought it was a joke and there’s a hidden camera. I was like ‘okay.’ At that point there had been no enhancement matches for the women, it just wasn’t a thing. He was like ‘go put on your gear, we’re going to have you bump around a little bit.’ And I’m like, ‘This is really weird. Is this real?’ Sure enough, (that was) Nia’s first night on Raw, they’re going to debut her. This is the first Raw after the brand split of Raw and Smackdown. It’s her first match on Raw after coming up from NXT. And you can only imagine how nervous I was, trying to get in the ring with Nia Jax on her Raw debut. … There was so much pressure.”

Britt Baker has been through a lot already in AEW including a concussion. Now she has her eyes focused on the big Casino Battle Royale match at All Out. If she can win that match then she will be getting a once in a lifetime opportunity to become the first-ever AEW Women’s Champion on October 2nd when the company debuts on TNT.