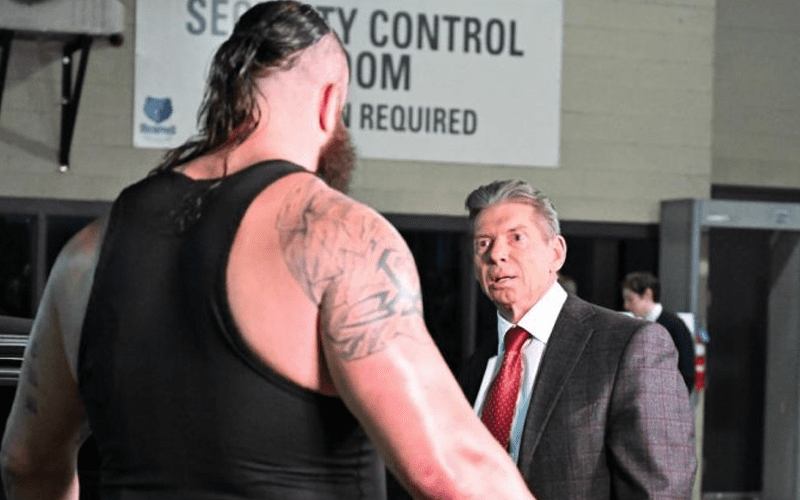 Vince McMahon has a lot of power in WWE because it’s his company. It stands to reason that he would be the one to talk to if you needed something to be changed.

Braun Strowman recently spoke to Not Sam Wrestling Podcast where he explained frustrations he was having with WWE. He went to Vince McMahon and told him that he was “miserable.” This led to McMahon kicking everyone out of the production meeting so they could have a real heart-to-heart conversation.

“I was like, ‘Vince, what is going on? I’m miserable.’ And he talked me off a ledge. He was like, ‘Look, big man, I want you for the long haul. It doesn’t matter what you’re doing right now. I care about what you’re doing ten years from now. I’ve invested in you, you’re one of my guys. Don’t worry. You’re fine.’ And just hearing that, coming from that man … I dunno … legitimately I walked into the production meeting one day and I was like, ‘I’ve had enough.’ I was just mad about everything.”

“He kicked everybody out of the production meeting — like two hours before Raw was about to start, the show wasn’t even done — and talked to me for forty-five minutes, heart-to-heart, man-to-man conversation and opened my eyes to the picture of like ‘wow, why am I worrying about this?’ Vince doesn’t get the credit that is due to him. And if he hears this, he’s gonna get pissed off that I’m saying his name and putting him over.”

Vince McMahon’s Jedi Mind trick is legendary and many people have spoken about it in the past. It sounds like that might have been what went on in this situation, because Braun Strowman went in with an issue, but it his viewpoint quickly changed after one conversation with Vince McMahon.