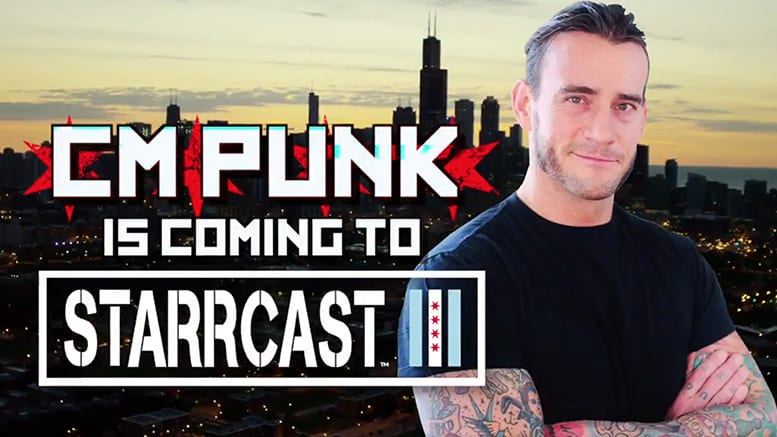 CM Punk was announced for Starrcast and everyone started wondering what kind of pipebomb he is going to drop. We will have full coverage of his Q&A right here at Ringside News and we don’t expect to miss a moment of coverage throughout Starrcast.

During the Q&A before Starrcast, Conrad Thompson was asked first-thing about CM Punk. How did the CM Punk deal happen? All it took was getting The Best In The World’s email address.

“I was looking for something that we could do for a banner event for Las Vegas and for Chicago at the same time because I knew I would be doing both of these and I sort of hung my hat on the Roast Of Ric Flair in Las Vegas which as we know didn’t happen and I wanted to have a rare appearance there and thought that The Undertaker would be the guy and as we know WWE pulled him so I felt like I needed to do something that was bullet proof and something that nobody saw coming and kinda among wrestling convention promoters the kinda white whale out there was CM Punk.”

“I got his email address and we exchanged emails over the course of several months and then after seemingly like no deal was going to come together, very quickly one did and we are thrilled that CM Punk is dusting off the microphone and joining us. So I think him being involved in anything wrestling related has got people super, super interested in Starrcast and we’re excited about it.”

Conrad Thompson is pretty good at thinking on his feet. After all, WWE did sign two of his podcasting co-hosts to contracts causing him to certainly do some schedule shuffling. Starrcast is no different, but it doesn’t seem like WWE has any call whatsoever in pulling Conrad’s special guest for Starrcast III. Let’s just see what CM Punk will say when he takes the microphone in Chicago.