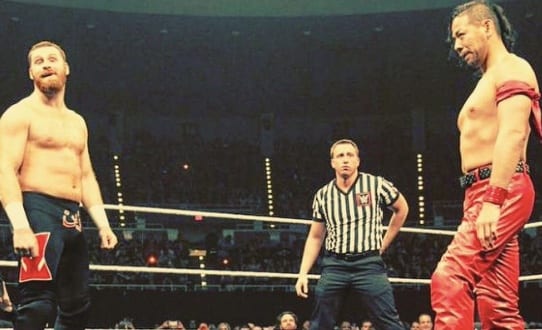 When Sami Zayn appeared to align himself with Shinsuke Nakamura on SmackDown Live last night, it got a lot of fans thinking about the history that the two men have shared together in professional wrestling.

When doing so, one very clear and obvious memory comes to mind: NXT Takeover: Dallas. On that night three and a half years ago, Sami welcomed the King of Strong Style to WWE with, interestingly enough, the best match of Nakamura’s entire run with the company (and arguably Sami’s too).

When you have a showdown like that there’s a certain bond that is formed between the two competitors, and that, as you can see by Zayn’s tweet, serves as the origin of their coalition.

There’s a good chance that the former Underdog from the Underground is simply using Shinsuke in order to get what he wants, but for the time being, we’re happy to see where this odd friendship goes and how it develops.

The future of the Intercontinental Championship plays a big role in that, because that’s the kind of title that Zayn could really help to grow and increase the prestige of. Then again, many would’ve said the same for Nakamura’s reign, and it hasn’t quite worked out that way.

Clash of Champions is right around the corner so if we’re going to see some kind of development here, it’ll almost certainly come next week.

Will we eventually be treated to a long-awaited rematch on a big stage? We sincerely hope so.