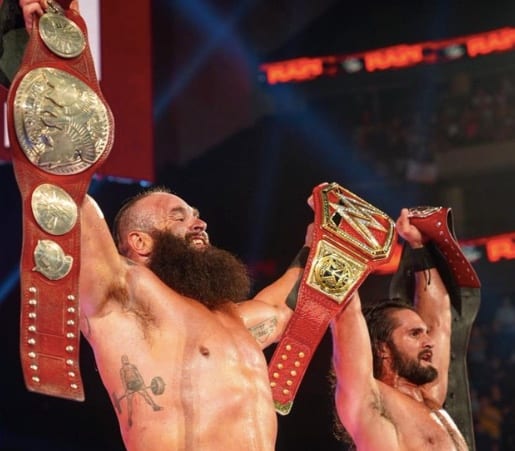 They defeated The OC in the main event of the show, with the belief being that they’ll lose the titles straight back to them in order to facilitate a potential Rollins vs Strowman showdown.

For now, though, fans of this odd pair can bask in the glory of their title win – with Braun reacting to the triumph on social media.

While there’s a very good chance this ends in disaster one way or another, we quite like the position that Braun is in right now. If anything, turning him into a tweener as opposed to an outright babyface could be the way to go.

The OC should be fine and will be able to bounce back from the loss, but it definitely seems as if they’re going to be adding another member sooner rather than later. There’s no guarantee in that, but as we all know, there is strength in numbers in the WWE.

AJ Styles was quick to voice his displeasure about the title loss, but he got over it in time to stream a few games after Monday Night RAW.

Gallows & Anderson, on the other hand, will be in the process of planning to wrestle the tag titles back from Strowman & Rollins, potentially even before Clash of Champions depending on whether or not they can work themselves into a rematch of some kind.