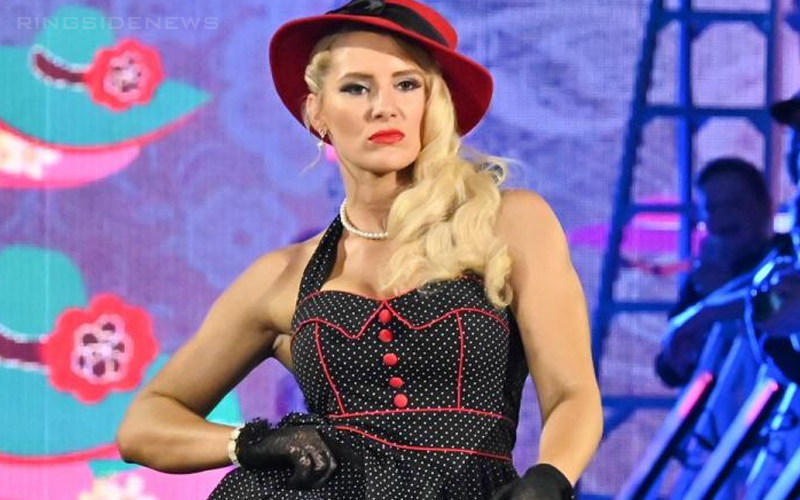 Lacey Evans hasn’t been around WWE much recently. After losing at Extreme Rules in the main event she kind of disappeared, but she’s still working on the road and actually paired with Becky Lynch at house shows.

Dana Brooke and the Lady Of WWE recently got into quite an online argument. This all started when Evans said one of her pearl earrings fell out while wrestling Dana Brooke last week. This caused Brooke to reply that she wishes she would have smacked Evans even harder.

This reply from Dana Brooke caused one fan to ask Lacey Evans why Brooke is being so mean to her. The Lady Of WWE had a classy reply for the nasty Brooke and held nothing back when sharing her opinion.

Because @DanaBrookeWWE wants another match hoping her career takes off. Meanwhile I want to eat my apple pie in piece in catering and be left the hell alone. I dont sweat for nothin sweetheart

This obviously didn’t sit too well with Dana Brooke either because she fired back at Evans while calling her classless trash. It sounds like these two could be having a feud on the lower portion of the card soon enough.

We’ll just have to see how WWE plans on using Lacey Evans from this point on. She received a golden opportunity with WWE, but some are of the opinion that she wasn’t ready for the push she received.

Dana Brooke might hold some resentment because Evans got a push that Brooke wants so badly. If anything, it was certainly entertaining for a few minutes as their little beef lit up our Twitter timelines.