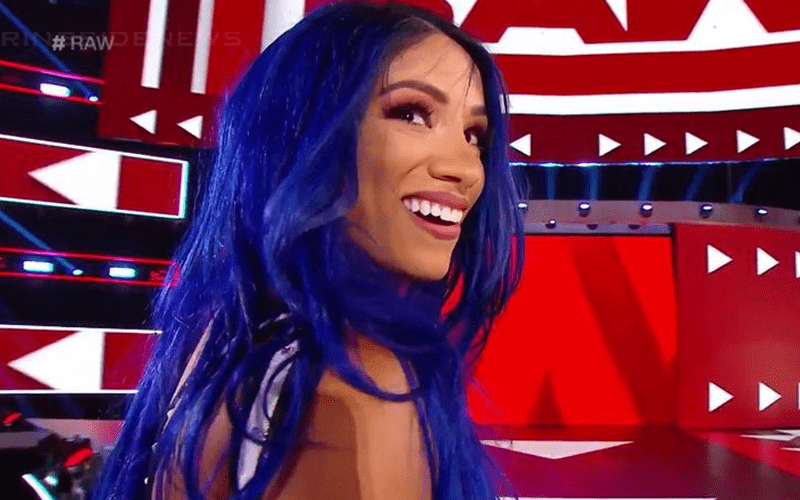 Sasha Banks’ WWE return was a big deal and ranked on global Google searches that night. Plenty of fans were surprised when she returned and her new blue hair came with a real mean streak too.

We previously reported via Brad Shepard that Banks’ return was set for Summerslam weekend. That’s what happened and her comeback looks like it will be an eventful one.

Sean Ross Sapp was asked about Sasha Banks’ return on a Fightful Select Q&A. WWE was kayfabing their employees and Banks keeps a very tight circle so information was very scarce.

“WWE was kayfabing several people in the company. Really, nobody knew when she was coming back. She keeps a very tight circle.”

As far as what Sasha Banks will do after her WWE contract is up, nobody knows except for her.

When asked whether he thinks that Sasha Banks vs Bayley could happen at Survivor Series, he had a very interesting reply. Sapp was quick to be very affirmative when he responded saying.

“I think that could be happening a whole lot sooner than Survivor Series.”

We’ve seen Banks vs Bayley before, but their roles in the company make this match interesting once again.

We’ll have to wait and see how WWE continues to book Sasha Banks during her return run. She’s obviously in a top spot and with the Wild Card Rule she could always pay her old friend Bayley a visit on SmackDown. Then again, The Hugger didn’t seem to want to talk about what Banks did this week. Therefore, Bayley could always stop over at RAW as well.