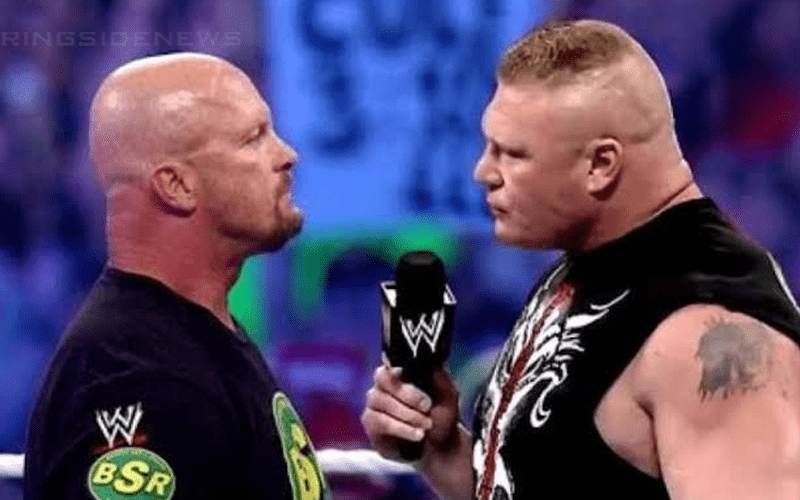 Steve Austin famously walked out of WWE after he refused to put over Brock Lesnar in a match with no build in 2002. This was simply supposed to put Lesnar over as a bigger force on his way to becoming King Of The Ring.

While speaking to Pardon My Take, Austin opened up about this big disagreement with Vince McMahon before he walked out. He had his own reasons for not wanting to let Brock Lesnar defeat him during a King Of The Ring qualifying match. Because he had a lot of stock in his character.

Austin ended up taking his ball and going home, but he would eventually return. Things might not have ever been the same after that though as he never really reached Attitude Era heights again.

“I remember one specific time in Cleveland Gund Arena. They had me booked with someone that I’d already said I would not work with this person. And we were in a room about the size of this one. And man I let loose with some real colorful language, but there was a bunch of that going on and I let everybody know exactly what I thought because I told you don’t put me in a situation you did. And I said now I’m the fucking bad guy, I said I told you not to do this to me. And it was much worse than that.”

“So there’s there’s been those times and the time when they wanted me to fly down to Atlanta for Monday Night Raw and put over Brock Lesnar and the night before I was working in Columbus Georgia with Ric Flair in a cage so I was like a kid in a candy store working with the GOAT. And then you know of course it didn’t show up because it wasn’t time for me to do the favors yet for Brock and an unadvertised match in a tournament style TV match whereas Hey man I love Brock Lesnar and I’ll lose to him any day of the week. But build it up so we’d all make money off of it and it’s going to mean something. And when you get a guy red hot like I just had Hogan on the podcast and I’ll put myself there. But when you get guys who really really draw stupid money that’s a very delicate balance that you just don’t take stupid liberties with or you’ll kill it off and you can never recreate it.”

“I was very protective of myself maybe too much so but it took me seven and half years to get there so no one was gonna yank the carpet out from underneath my feet not even Vince.”

We will never know what it is like to live in a world where Steve Austin agreed to let Brock Lesnar defeat him in a match that had zero build. They seemed to work everything out regardless of Austin’s status with the company, but this was certainly a tumultuous time for The Rattlesnake’s relationship with WWE.

Thanks to Barstool for the quotes