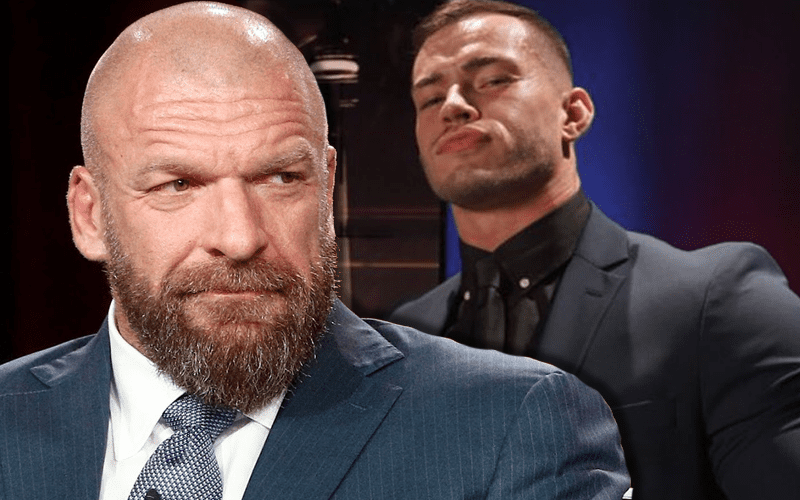 Austin Theory appeared in the crowd during NXT TakeOver: Toronto, but fans shouldn’t get too excited just yet about Theory making a jump to NXT just yet.

Although Austin Theory is a guaranteed Superstar if he keeps up his current career trajectory, Triple H revealed exactly why he was invited to TakeOver.

The Game said during his post TakeOver media conference call that WWE has a relationship with EVOLVE and they will continue to build it. Therefore, Theory was invited as a representation of the kind of talent they have.

“He’s an evolve talent but right now we have an agreement with Austin Theory as well. He’s an EVOLVE talent. It’s a promotion there that’s helping talent get to the other level. If you go back to when we very first started all this, we talked about going to the UK — it’s about working with promotions that help cultivate new talent that help them get to a new level.”

“It’s not about booking a show and using talent because they’re available. It’s about cultivating talent, helping them grow so that they can get to the next level. That’s what EVOLVE does and happy to work with them.”

You can never count out someone like Austin Theory making a big splash in NXT, but the idea might be that WWE wants to make sure people know who he is before that happens.

EVOLVE is also one of the companies that WWE will be featuring on the WWE Network even more as time goes on. They already aired the EVOLVE 10th Anniversary Special on the same night as AEW’s Fight For The Fallen, therefore, this is probably not the last time we’ve seen Austin Theory by a long shot.