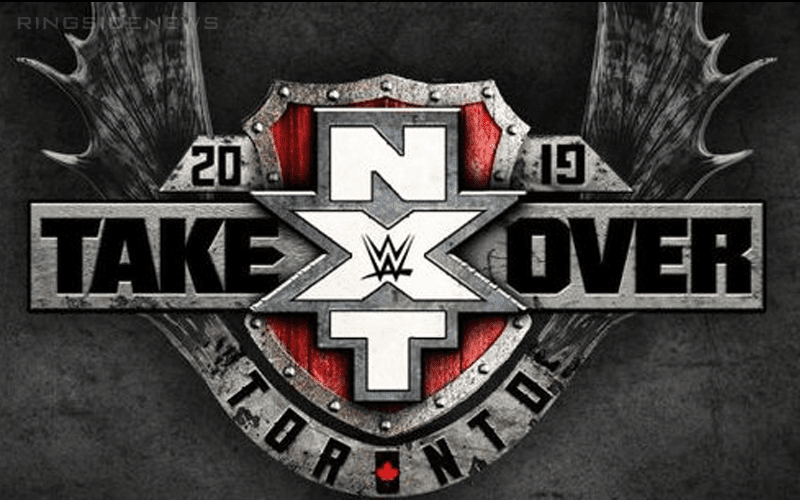 Welcome to Ringside News’ coverage of NXT TakeOver: Toronto. We will kick everything off at 7:00 PM once the show gets underway.

The NXT roster usually brings it at TakeOver specials so tonight should be no exception. It will also be incredibly interesting to see if anyone new shows up in the crowd to announce that they’ve signed with WWE.

The main event is Cole vs Gargano in a 2 out of 3 falls match. This one is already going to be a five-star match according to the betting odds. So hopefully they deliver.

We’ll also have to see whether The Street Profits retain their titles after being called up to Raw. Or, maybe they’ll just do those awesome backstage vignettes for the rest of their careers?

A lot of people have their eyes all over this card as every match is likely to deliver. You can check them out below and come back at 7:00 PM EST as everything kicks off live from Toronto.

Dawkins and O’Reilly started out the match. Dawkins had some fun pointing out how much shorter Kyle is than he is. Fish took the tag and then Angelo barreled over Bobby with his size before Ford took the tag.

The Street Profits were tagging in and out often while working on Fish. Then Bobby kicked Ford a few times to take him down. Ford returned fire with a few armdrags and a nice dropkick to pop the crowd before tagging Angelo back in.

The Undisputed Era soon gained control and Dawkins felt the brunt of that force from O’Reilly and Fish. Kyle laid in some knees and wore Angelo down before tagging his partner again.

The Street Profits were wearing Toronto Raptors colors too, so they were obviously the babyfaces as Kyle mounted Angelo and laid in some closed hand punches.

Ford took a hot tag and he jumped over Fish and got him with a spinebuster for a two count. Then Montez went for the People’s Elbow, but Kyle stopped him by grabbing his leg. Then Ford nailed Fish with a Rock bottom for a two count.

Undisputed Era knocked Dawkins off the apron and nailed Ford with a double team German suplex for a two count. Ford then went up top and fought Fish off before Bobby kicked him off again. Then O’Reilly took the tag, but Fish hit a Super Exploder suplex before O’Reilly hit a top rope knee drop and then Kyle locked on the Achilles Heel.

He wouldn’t let go and then Dawkins slammed Fish onto O’Reilly.

Dawkins got the tag and he came in hot by smashing everyone and then he hit a capture belly to belly suplex. Ford tagged in and hit a super blockbuster for a two count.

Everyone was down and then they got up around the same time to trade punches. Kyle and Ford continued to fight on and Montez kicked him out of the ring before doing a flipping dive on both opponents.

Dawkins speared Fish and then Ford nailed a top rope splash on Kyle for the win.

Candice attacked Io before the bell and Jessika Carr had to pull her off. Then Candice’s assault kept up in a big way once the bell rang.

Io soon suplexed Candice onto the announce table and it didn’t break. She was selling that big time and almost got counted out.

Io kept up her assault on LeRae and she didn’t seem to care much about being a heel. She hit a slapjack and a kick to the head for a two count after a lazy cover.

Candice tried a head scissors takedown, but Io landed on her feet easily. Io continued hitting LeRae with everything she had at a methodical pace. Then Candice moved out of the way when Io went for a top rope dropkick and she got a small second wind.

Then they traded German suplexes and Io hit a bridging German for a two count. Io hit a double knee strike in the corner and then she landed on her feet after Candice tried to hit her with another German from the top rope.

Then Io hit a backbreaker and hit a moonsault for another two count and this popped the crowd big time. Io was shocked. Then Io got the Coji Clutch and Candice couldn’t get out until she passed out.

Suddenly, Matt Riddle took the ring out of the crowd saying that things shouldn’t be like this. So he called Killian Dain out.

They brawled around the ring. This was never an official match. Referees broke them up and then Riddle jumped on Dain up the ramp. This ended with Dain gouging Riddle’s eyes and then Riddle landed two knees to the head of Dain before laying in some elbows before referees pulled Riddle away.

Dain hit a crossbody and then referees pulled him off. Riddle locked on a sleeper, but Dain knocked Riddle off before Matt jumped back on and then then all took a bump off a big piece of the set as through two tables on the ground as Killian grabbed a security guard too.

Dream got sent out early so Dunne and Strong could start things out. Then Dream got in and backed into Dunne. Strong dragged Dunne out and drove his back into the apron before getting back in.

Then Dream hit a top rope double ax handle, but it didn’t seem to do much damage. Dunne got back in the ring and he brought Strong into a dropkick from Dream.

Dream was taken out on the outside by Dunne so Pete jumped back in so he and Roddy could work a little bit more.

Dream made his way back in eventually and he got Roddy in a sharpshooter, but Dunne hit a top rope double stomp on Dream to break it up.

They moved outside where Roddy hit a dropkick through the ropes on Dream and Dunne nailed a moonsault off the top to the outside. They moved into the ring and Dream took a German Suplex from Dunne and then Pete Dunne suplexed Roddy on Dream for a two count.

They all threw fists at each other and then they suplexed each other. Then they all hit each other’s finishers, but nobody could make a cover. Dream climbed to the top rope and Dunne joined him. Roddy stopped them both and climbed off too. So they all took a bump to the mat.

Dream was taken out of the ring and Dunne tried to get another triangle on Strong. They fell in the corner and then dream hit a post-to-post elbow drop on Pete Dunne’s sternum.

Strong gave everyone a forearm to the face and slammed them both down too. Then he locked both opponents in a Strong Hold, but Strong couldn’t hold it for long.

Then Strong took Dream out with a knee before Dunne broke both of their fingers. Pete hit Strong with a Bitter End before Dream stopped the referee from counting. Then Dunne beat Dream down and stomped Dream’s head into the mat.

Strong dodged a kick and then Dunne landed on his feet off a German, but Strong reversed into another Boston Crab.

Dream threw Strong out and hit a Dream Valley Driver on Dunne. Strong threw Dream out and he hit his finisher on Dunne, but then Dream jumped in right in time to hit an elbow drop and pin Dunne for the win.