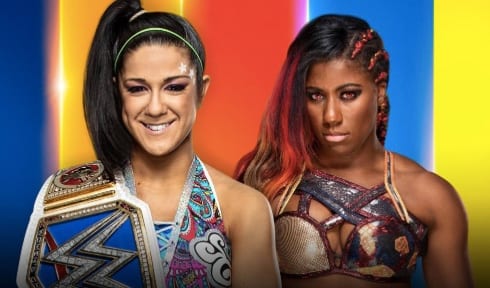 As seen on Sky Bet, the betting odds for Bayley vs Ember Moon at WWE SummerSlam have been released.

When this match was first booked it seemed as if there was a lot of potential for this feud, and while things have died down a little bit in terms of the hype behind their SummerSlam match, we’re still confident in saying that these two are going to produce a really fun match on Sunday.

Bayley’s title reign is starting to gather a bit of momentum, and it’ll be interesting to see whether or not WWE allows her to run with that beyond the biggest party of the summer.

Bayley is currently the 2/5 favourite to walk out of Toronto with the SmackDown Women’s Championship over her shoulder, whereas Moon is the 15/8 underdog as she attempts to cause the upset.

Moon has been treading water a bit ever since making her way up to the main roster, and a high profile match like this could really inject some life into her run.

Of course, there’s no guarantee of how much time they’re going to be given when you consider just how many great matches are going to be on this card, but at the very least, we think they’ll put in a solid effort.

If Bayley does retain, then it’ll be interesting to see who WWE throws at her next as she continues to try and elevate the status of the SD Women’s Championship prior to the show’s move to FOX.