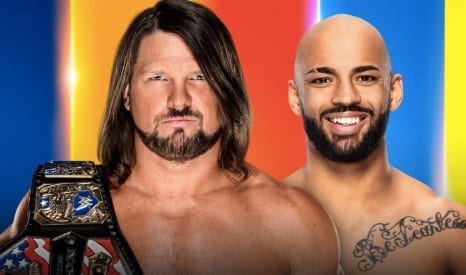 As seen on Sky Bet, the betting odds for AJ Styles vs Ricochet at WWE SummerSlam have been released.

The back and forth rivalry between AJ Styles and Ricochet has been pretty entertaining to watch, with the feud resembling a supervillain vs a superhero battling it out for supremacy – at times, that is.

Of course, the main thing that they’re fighting over is the United States Championship, which is exactly what will be on the line when they square off again this Sunday at the biggest party of the summer.

The betting odds currently have The Phenomenal One AJ Styles down as the 8/15 favourite to retain the United States Championship, whereas Ricochet is currently listed as the 11/8 underdog.

Those aren’t the worst odds in the world, but given the way in which this feud has been going, it’d be a little bit surprising to see The One and Only come away with the belt again. After all, the reunion of Styles, Gallows & Anderson has only really just begun, and WWE will want them to pick up as much steam as they possibly can.

There’s a lot riding on the winner of this match when it comes to the future of the belt, mainly because the WWE Universe is so sick of seeing it being treated poorly.

Either way we’re almost guaranteed to get an entertaining encounter out of the two men, and their biggest task is going to be seeing whether or not they can surpass their previous efforts.