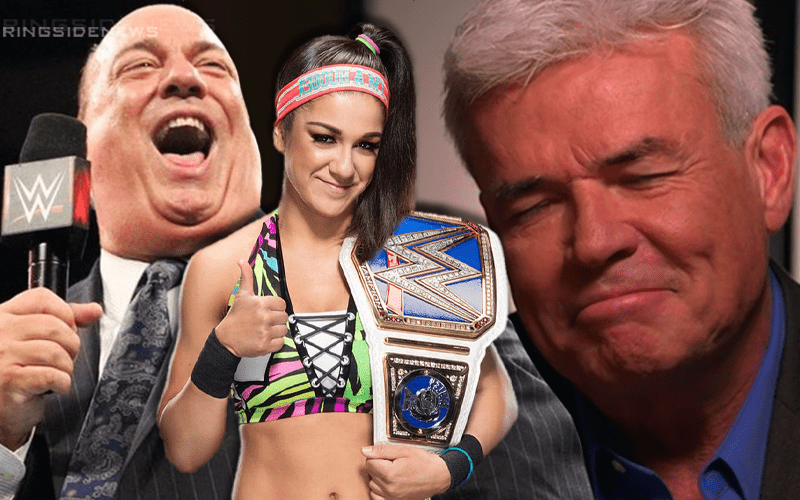 Bayley is the SmackDown Women’s Champion so she is in the spotlight in a big way. Despite her position in the company, The Hugger revealed to Talk Sport that she only just met Eric Bischoff recently and hasn’t had much time to build a relationship with him.

She said that Paul Heyman and her have been able to “chit-chat” a few times. Their first interaction came after Bayley’s match with Ronda Rousey. However, it doesn’t seem as though the SmackDown Women’s Champion has had much interaction at all with the new Executive Director of her brand.

“Paul Heyman you get more interaction with because he’s around backstage a little longer,” Bayley explained. “He’s always back there with Brock. The first time I ever talked to him was, I think, after my match with Ronda Rousey. He loved it and he was talking about how good it was for the both of us and how different it was for the both of us. Since then we’ve had little chit-chats here and there, but nothing too serious.”

“And I actually just met Eric Bischoff the other week [laughs]. So we’ll see how that goes – kind of need to start building that relationship now!”

Hopefully, Bayley and Eric Bischoff will be able to develop a better relationship because that could be key for her success on the blue brand. Eric Bischoff is very busy learning the ropes in WWE so he might not have much time to socialize, but it’s also a pretty safe bet that he already knows who Bayley is.