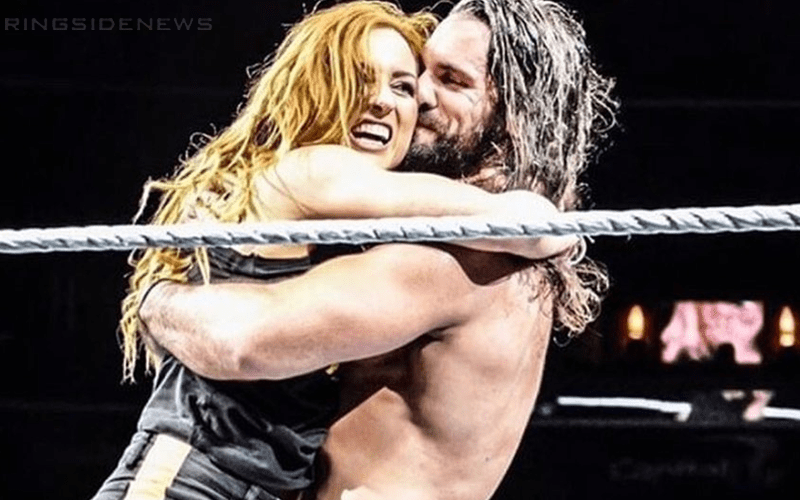 Becky Lynch and Seth Rollins are a couple in real-life and WWE is constantly reminding fans of that fact. It looks like we’ll have to get used to it as well. Because even though they might not be in any storyline together, Michael Cole still reminded fans last night out of the blue that they are a real-life couple.

While speaking to Talk Sport, The Man said that she was apprehensive about bringing her real-life relationship to WWE’s product. In the end, it really wasn’t about what she wanted because Vince McMahon makes every final decision, but she didn’t want to have the fans reminded every five minutes that she’s dating Seth Rollins either.

“Honestly, I was very apprehensive. What I didn’t want was everybody talking about the relationship. What I wanted was two bad asses, two people at the top of their game fighting side-by-side. Not for the world to be reminded every five minutes that this is Becky Lynch’s boyfriend or that’s Seth Rollins’ girlfriend. Which, of course, they didn’t do. They were the masters of subtlety”

“I wanted to work with Seth because he’s the best in the business – you know, besides me – but working with him was awesome. He really is the absolute best.”

Becky Lynch wants to stand on her own which makes sense. Because she earned a WrestleMania main even spot without dating Seth Rollins. In fact, she’s only been dating The Architect since April according to him so this is still a relatively new relationship.

We will just have to see where things go from here. Hopefully, they can stay together because things might get awkward if they split up for real yet WWE isn’t ready for that to happen yet. They seem very happy right now and are reportedly living together as well so there doesn’t seem to be much of a risk of that happening right now.