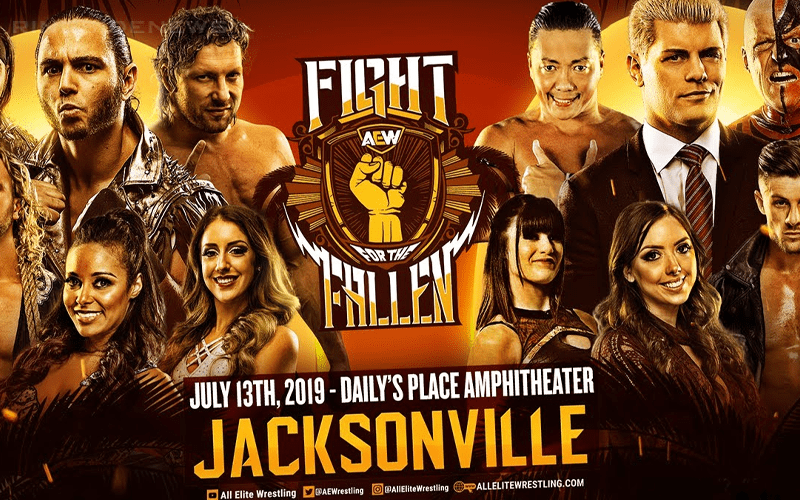 AEW’s third event took place last week and Daily’s Place was packed for AEW’s Fight For The Fallen event. However, less people actually tuned in to watch the show at home.

The Wrestling Observer Newsletter reports that Fite TV numbers were down outside of the U.S and Canada market who got to watch the show for free. This event had a higher price point, and it was just two weeks after Fyter Fest which probably played into it a lot.

Fans who got to watch the event for free were actually down as well. In fact, they were reportedly down 10-14%. There was the added counter programming of the EVOLVE 10th Anniversary Special on the WWE Network, but that is still noticeable

Even though fewer fans tuned in, the audience was said to be “very consistent” throughout the broadcast. B/R Live also reportedly added 18,000 subscriptions on the day of the show. So B/R Live is still happy with AEW as their last two events have brought a lot of success and they keep bringing in new subscriptions.

Most of the B/R Live executives were described as pleasantly caught off-guard by the success of the last two AEW shows and the PPV numbers from the first show, particularly that there has been a significant increase in subs every show.

AEW Fight For The Fallen was a charity event, but if it hadn’t been so close to Fyter Fest this could have been a much bigger show in terms of viewership. Thankfully, this gives them even more time to prepare and hype All Out for August 31st where the event will actually cost fans in the U.S. and Canada who want to watch on pay-per-view or through B/R Live.