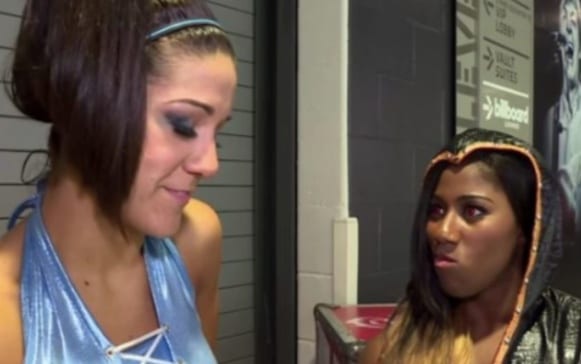 The Bayley vs. Ember Moon feud that is about to begin ahead of SummerSlam really is quite an intriguing one, and it actually has more layers than a lot of fans may realise.

Bayley has been reigning supreme as the SmackDown Women’s Champion for a while now, and many fans believe that Ember could serve as the biggest threat to her title reign yet. Even if she doesn’t, though, we’ll almost definitely get a great match out of the two of them.

Interestingly enough, it turns out that the history between these two women dates back further than most of us even knew: and it all started with a backstage segment.

It’s always fun to see throwback moments like this, because it gives us an idea of the journey that both competitors have been on. We don’t trust WWE to put this into the video package for their actual match, but hey, you never know.

Over the next few weeks we’re going to be watching closely to see what kind of a build they go for with this match. Will they keep things pretty respectful between the two, or is someone going to take on something of a tweener role?

Whatever the case may be there are some really exciting possibilities out there for WWE to explore, and if Moon can come out of this looking like a star on the same level as Bayley, we could see the SmackDown women’s division start to thrive in ways it hasn’t done for quite some time.