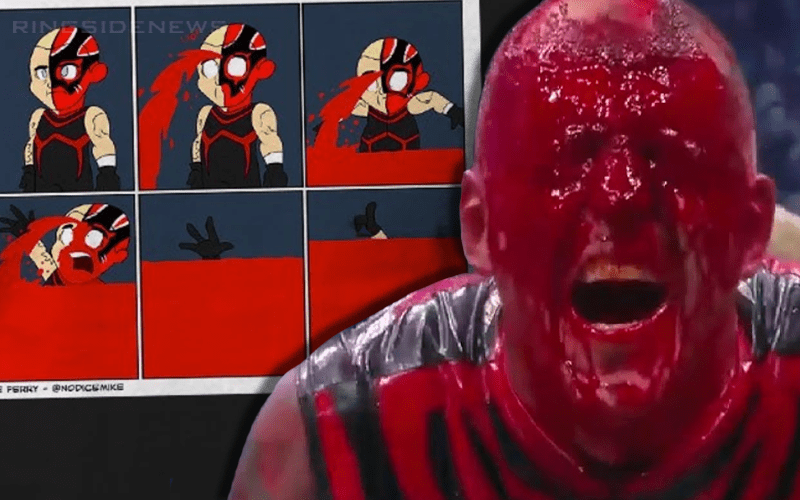 AEW Double Or Nothing featured a brother vs brother match that fans will never forget. The Natural vs The American Nightmare tore the MGM Grand Garden Arena down and stole the show as Cody Rhodes and Dustin Rhodes finally got to have a match on a big stage.

During that encounter, Dustin Rhodes found himself bleeding like a stuck pig throughout most of the match. This was a big deal as he had just left an extremely long stint as Goldust in WWE where bleeding is a big no-no.

Rhodes even commented how the amount of blood that poured from his head at Double Or Nothing even scared him a bit. He was okay though, but they still needed to change out the canvas for the rest of the night after that bloodbath was over.

Now there is a t-shirt to celebrate this happy accident of immense bleeding in the ring. Because if Dustin learned anything in WWE it’s how to market a good thing.

Dustin Rhodes is selling a new t-shirt that is poking fun at the amount of blood that poured from his forehead at Double Or Nothing. It is a pretty great design with cartoon panels and as the toon Dustin bleeds it fills up the square which eventually sees him drowning in his own blood. Yes, that’s a bit much, but then again he lost about a pint of blood at DON.

The Young Bucks don’t like to let their blood leave their bodies during matches, but you never know what kind of business the Rhodes Brothers could be in because both Cody and Dustin have bled in an AEW ring already.