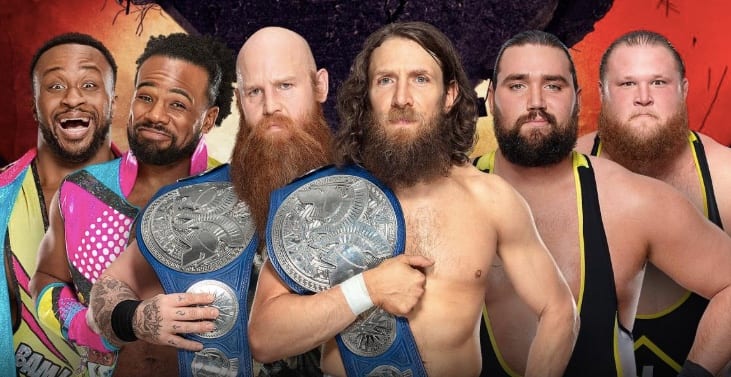 As seen on Sky Bet, the betting odds for the SmackDown Tag Team Championship match at WWE Extreme Rules have been released.

Daniel Bryan & Rowan have done a solid job of holding the titles over the course of the last few weeks – nothing more, nothing less. This weekend, though, they’ll face their toughest test yet as they take on both Heavy Machinery and The New Day at the same time.

The two challenging teams have very different experience levels on the main roster, but it really doesn’t feel like that’s going to matter when it comes to putting on a world class match.

The odds currently have the champions, Bryan & Rowan, as the 4/6 underdogs to walk out of the show with the titles. Heavy Machinery are second favourites at 2/1, with New Day actually being rank outsiders at 4/1.

This may come as something of a minor surprise to fans who feel like WWE will want to have the ‘everyone holds a title’ faction moment with New Day. Of course, there’s still time for them to do so, but nobody really knows how much longer Kofi is going to hold onto the belt for.

In terms of the tag match, though, this is obviously great news for the longevity of the belts if Bryan & Rowan can get the job done. They seem like a team that legitimately wants to bring some prestige back to the division, which can only be a good thing as we look ahead to the new era which will begin later on this year.