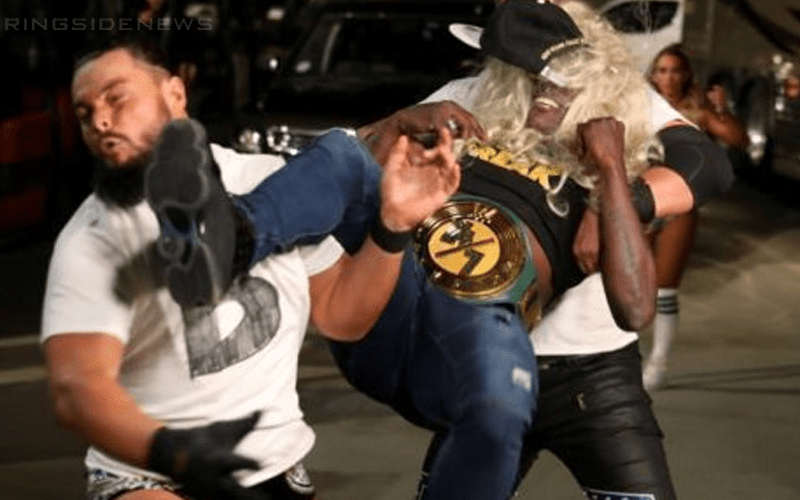 R-Truth is no longer the WWE 24/7 Champion, but because of that title’s rules everything can change in the blink of an eye with one social media post.

Truth has been having a great time with the WWE 24/7 Championship story. He’s currently chasing Drake Maverick, but he is still a highlight of the show while Carmella tags along to play a great partner in the hunt.

While speaking to E&C’s Pod Of Awesomeness, he revealed that there are several ideas he has for the 24/7 Title. This included having Curtis Axel and Bo Dallas as his bodyguards. Even if that doesn’t happen, he’s still having a great time.

“Man, I’ve been loving it. It gives me a chance to release. I can be funny, I can be entertaining. I’m getting more views doing this than I am a wrestling match. So, I’m having a ball. I’m glad I could take something that everybody thought was just the ugliest thing in the world and, well, it’s not that ugly.”Truth said.

“I mean, it’s cute. But everybody loves it now and another social media thing I was going to do, I was gonna talk about how many people [are] talking about how ugly my child [24/7 Title] looks. It’s not ugly, it just has a different look. But, I get to have so much fun with it and it can be never-ending with me with it and the [thing] that I love about it the most, it gets a lot of the guys some TV time.”

“Guys that you don’t get to see. I even asked creative about using all the guys more. I got ideas as far as like, using Bo Dallas and Joe Hennig [Curtis Axel] as my bodyguards. ‘Well why wouldn’t they pin you?’ Because I would tell them, ‘You guys don’t want this ugly title. You want the tag team titles.’”

“That funny, comedy stuff. Then they would be beasts when it comes time to do something. Every once in a while, they would roll me up — one would pull the other off — ‘What are you doing man? We’re supposed to be body guarding for him’ — ‘Well, I’m trying to make sure you stay on your toes. That was just a test.’ Things like that so, there are so many things we can do with the 24/7 but I don’t want to do the same thing to where it gets boring, to where it gets corny stupid.”

It will be very interesting to see what WWE left those guys do next with the 24/7 Title. They are thinking outside the box and able to really have a lot of fun as well. It is important to remember though that nobody gets on WWE television without going through Vince McMahon because R-Truth wanted to wear a wedding dress to Drake Maverick’s wedding.