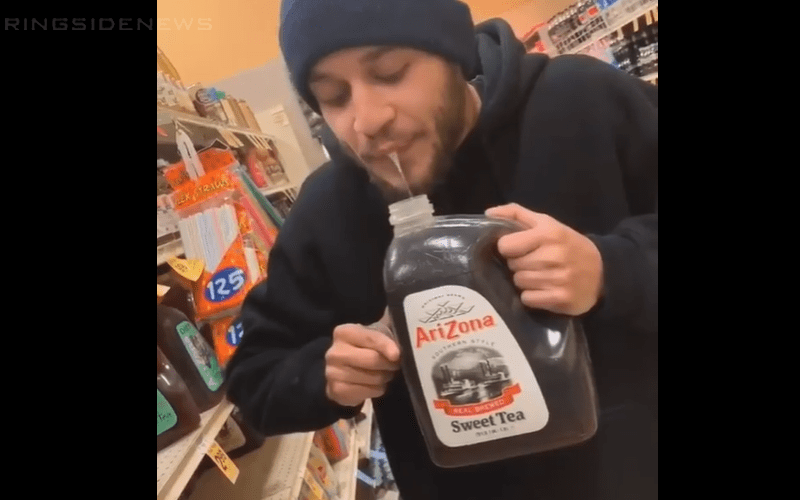 There is a trend of people going into supermarkets and eating, licking, drinking, and spitting on food only to put it back on the shelf for an actual customer to buy. Unfortunately, that is where society is nowadays.

Indie wrestler Shiloh Greaves was recently caught up in some controversy because a clip of him spitting in some tea and leaving it on a shelf went viral. However, that apparently isn’t the whole story.

Greaves explained everything on Facebook after the clip went viral.

“Had to address it eventually. But here we go. This is exactly what happens when videos are clipped up and displayed as something else. This was the ORIGINAL FULL CLIP of a wrestling promo filmed late on December 24, 2018, 7 months ago against Big T Thomas Moore. The character being portrayed is a bum/recovering drug addict. It’s SUPPOSED to make you go “ew” like frank gallagher from shameless. The tea WAS PURCHASED and this was done entirely for theater. Anyone that goes on my page can clearly see that I have a web series and can pretty much draw the conclusion that wrestling isn’t real either. The original post got little to no reaction about 600 views. 7 months later The social media lynch mob is all of a sudden very powerful. Lesson learned. Excuse me for thinking outside the box creatively and having fun with a CHARACTER. There was even a WARNING not to replicate and a viewer discretion warning at the top of my page since the material I put out is ya know, vulgar. Sorry to those who were offended. Would’ve never thought 7 months ago this would be a viral thing. I apologize for not keeping a 7 month old receipt for a $3 sweet tea that I ended up dumping out. I hope this somewhat clears things up. I made a mistake 🤷🏽‍♂️ don’t know what else to say really.”

You can check out the entire clip below which shows the promo that this tea sipping/spitting took place in. Hopefully, this will still encourage people not to do this kind of thing, event if it’s part of a bit. Because there are actually people who think it’s fun to tamper with food in this fashion.