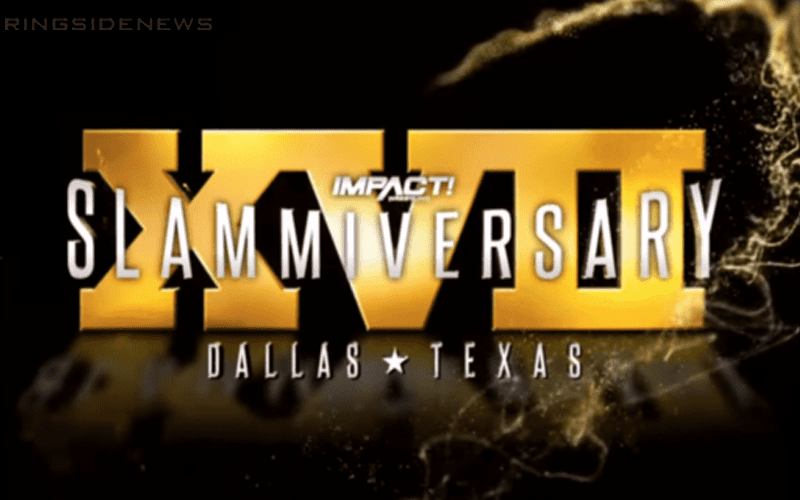 Welcome to Ringside News’ results for Impact Wrestling’s Slammiversary pay-per-view event. Everything kicks off at 8:00 PM EST so check back then for our results to begin.

Impact Wrestling stacked a pretty impressive card. There will likely be plenty of unexpected moments and high spots as well. There are four title matches and a first blood match scheduled for tonight as well with a lot of possibilities for even more violence.

Although Impact Wrestling might have spoiled the surprise for their X Division Open Challenge match, the entire card looks like we could be in for really fun night of total nonstop action.

You can check out the entire card below and don’t forget to check back at 8:00 PM EST because the results will start when the show does.

TJP vs Trey Miguel vs Jake Crist vs Willie Mack

Jake took a double super kick from Trey and TJP right from the start. Then they took Willie down and Trey pulled off a nice top rope armdrag on TJP. Willie hit a splash on TJP and he got a two count. Then Jake and TJP fought as Jake roughed him up and drew heat from the crowd.

TJP pulled off a double abdominal stretch until Mack knocked him down. Then TJP hit a springboard dropkick to the side of his head. This match was going so fast as Mack hit a dive followed by Crist hitting a diving DDT on Mack. Then Trey nailed a kick and a dive on everyone.

They set up a tower of doom move with TJP on the bottom, but Trey flipped out of it and ended up in a surfboard stretch as Willie hit a diving stomp on Miguel. That was brutal.

In the end, Willie Mack picked up the win after Jake Crist nailed a top rope cutter on Trey and then Mack came down with a frog splash.

The North (c) vs. LAX vs. The Rascalz — Impact Tag Team Title Match

This match was very fast and very back and forth for the beginning. The North took the first shots and then LAX had a moment when they cleared the ring, but all three teams soon started going at it left and right.

The North pulled off a German Suplex off the top followed by a senton and then LAX jumped in to take control. They hit Page and Alexander with double team moves and picked Ethan Page back up before Alexander knocked Page off the top rope to break up another move.

Konnan threw up an X on Santana and called the doctors to ringside. As Wentz broke up a pinfall in the ring.

The North ended up retaining their titles after stealing a pinfall after a powerbomb.

Edwards started things out with a kendo stick shot to the stomach. Kross’ face was all painted up during this match. This match is all about bleeding so let’s hope an accidental nose bleed doesn’t ruin it.

Eddie got a chair out from under the ring, but Killer didn’t let him use it before smashing his back into the corner of the apron. “Holy sh*t” chants broke out.

Then Kross got his own chair, but once they returned to the ring, Edwards hit a belly to belly and a German that Kross no-sold. Then Kross went out of the ring and Kross tossed a chair into Eddie Edwards’ face as he tried for a dive.

Kross slammed nailed a gut-wrench suplex from the apron onto a couple of chairs and good lord that was brutal and wouldn’t cause any blood. Killer Kross did that just because he wanted to.

Edwards dodged two chair shots and then he launched a chair at Killer Kross’ head.

Then eventually found themselves on the top rope where Edwards sent Kross to the mat with a Busted Knee Party. Neither man was bleeding and then Eddie got “Kenny” hit kendo stick.

Killer got the Kross Jacket on Eddie as he took kendo shots to the face and then they rolled out of the ring. Eddie hit a tiger driver on the floor and still, nobody was bleeding.

Eddie grabbed his kendo stick again and waited before snapping the stick and then he just stabbed Kross RIGHT IN THE MOUTH.

Kross started coughing up a lot of blood. Nice blood packet work… we’re hoping because yeah… he stabbed him in the mouth.

Moose takes RVD down before the bell sounded then he laid in a chop, but RVD hit a couple of kicks and a basement dropkick before hitting his vintage spinning legdrop, but Moose rolled out before rolling thunder.

Then Van Dam nailed a somersault dive over the top rope. Then Moose nailed a big boot on the outside. Moose tried to powerbomb RVD on the apron, but Van Dam turned it into a rana followed by another somersault dive off the apron.

Moose hit two dropkicks once then returned to the ring. This was followed by some punches and a boot choke in the ropes. After toying with RVD for a bit, Moose tossed him out of the ring.

Moose maintained control as Rob Van Dam did a lot of selling. Moose also did a ton of taunting in between each move. Van Dam started to fight back, but then Moose latched on a rear chinlock. Moose nailed a big boot and sent Van Dam Down.

Moose said he was the whole f’n show and then Van Dam backdropped him onto the ramp and that got a “holy sh*t” chant from the crowd. RVD hit two clotheslines and then connected with a backheel kick before RVD hit a split legged moonsault for a two count.

RVD started to rally and jumped on the top rope. Then Moose caught him with a kick followed by a chokeslam powerbomb for a two count. Then they started trading punches until Moose hit a DDT.

Moose went for a frog splash, but he hit only canvas. Then RVD hit a DDT for a two count. Moose hit a low-blow after the referee was distracted from being used as a shield.

Then Moose got out of the ring and got a chair. This is not a no DQ match. The referee wouldn’t let him whack RVD with the chair and then Van Dam hit a Van Damniator for a two count as Moose got his foot on the rope.

Van Dam hit a drop toehold onto the chair before getting on top and hitting a 5 Star Frog Splash right onto the chair after Moose moved. Then Moose hit the spear and won.