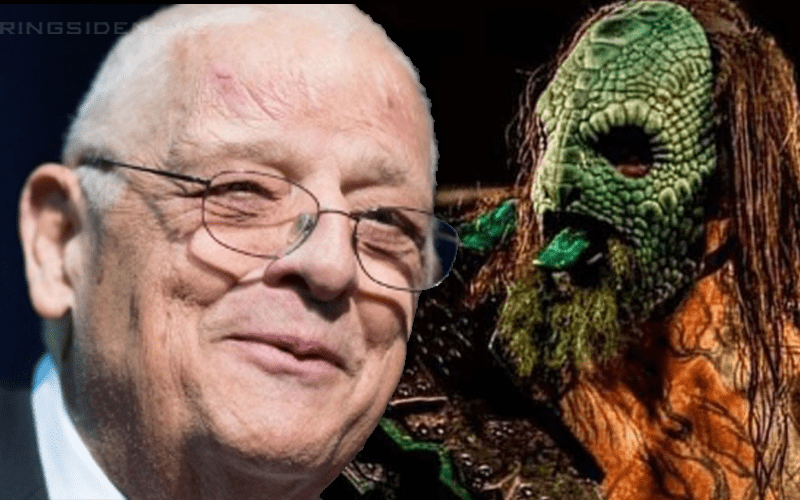 Dusty Rhodes was able to help countless performers hone their craft and become so much better during his time in the pro wrestling business. It turns out that he had a great influence on a certain wrestling dinosaur as well.

AEW has a lot of very talented stars and Luchasaurus stands above a lot of the pack and it’s not just because he’s so tall. The fact he has a Master’s Degree helps though.

Luchasaurus he explained to Chris Van Vliet, the Luchasaurus character was something that Dusty Rhodes and he had worked on while in NXT. However, they just weren’t able to make things come together until Luchasaurus was already out of WWE’s developmental system.

It didn’t come from my brain exactly. It just kind of molded over time organically and I think that’s why it works. When I was in developmental in WWE, I was working with Dusty Rhodes. He was one of the few guys that really believed in me because he saw this weird guy that had this Master’s degree have an interesting look. He didn’t know how to place it. He knew there was something like this Luchasaurus in his head and we just couldn’t put our finger on it and every week we’d try something.

It wasn’t until Lucha Underground when everything finally came together for Luchasaurus, but his character certainly stood out in a big way.

When I got to Lucha Underground on the day I started, they were like here we got this character with a giant snake and helmet mask … Before I went out there, I ask them to cut my hair out. So we started to cut it up a little bit and then when I went out there the crowd just started chanting something to me. I thought they were making fun of me … I got to the back and they’re like ‘dude, they were chanting Luchasaurus. I don’t know why but that’s pretty cool. You should just run with it on the indies because you’re trying to resurrect your career.  I was like ‘you know what, I’m just gonna do that. It’s crazy and it made me think of Dusty right away because he wanted me to do something like that but I was like I’m not gonna talk like I’m a dinosaur grunting. I’m just gonna be myself with the Master’s degree but now I have a mask so all those rough edges are kind of smoothed out because I have some crazy character that lets me really just be myself. So it’s almost like an ode to Dusty for me. I just started to run with it but it was hard at first because everyone looks at it as this is just some stupid gimmick, this must be some guy from the middle of Mexico that just walks around and is really big so it took me a while to kind of knock down the doors and have people give me opportunities and let me create the characters throughout my indie career.

Luchasaurus is bound to be a popular character in AEW now. As he walks around with Jungle Boy on his shoulders. It is seeming to get over with the crowds in a big way. It’s interesting to know that a lot of that influence came from Dusty Rhodes as they worked together in NXT and now the Luchasaurus is now working for Cody Rhodes.