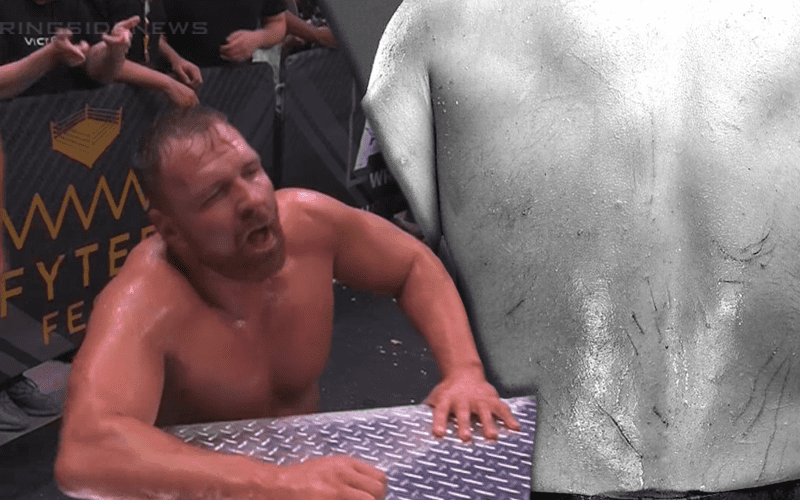 Jon Moxley’s match at AEW Fyter Fest might not have counted because it was a non-sanctioned match, but the pain was sure real. Mox has the torn up back to prove it.

During the AEW Fyter Fest non-sanctioned closing match between Jon Moxley and Joey Janela, the former Dean Ambrose took a hurricanrana from the top rope onto a steel chair wrapped in barbed wire. Naturally, Moxley didn’t have a shirt on so it was steel on steel on flesh.

Later on some thumb tacks and barbed wire boards got involved and both Moxley and Janela took painful bumps. So Moxley really made a statement with his first match in AEW even if it wasn’t official.

There is a reason why Tony Khan was so quick to point out that Fyter Fest was a special pay-per-view event even if it was free for U.S fans. He made it very clear that this is not the level of violence anyone should expect on AEW’s upcoming TNT television show.

Moxley was gracious enough to share a black and white photo of his tattered back after the brutal match. His body has seen worse, but after so many years under WWE’s umbrella you can’t blame him for going all out with a big return of the Moxley character to show everyone what he’s really all about.