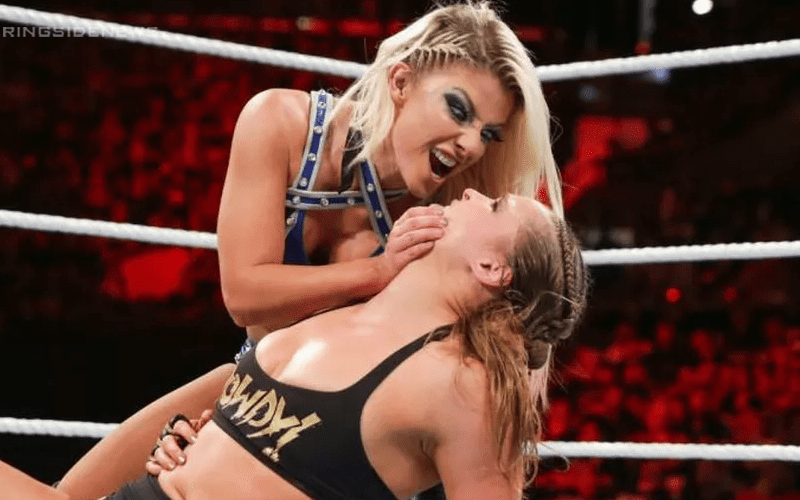 While these concussions happened on two separate occasions, the blame can’t be placed solely on Rousey. Because mistakes happen in the ring all the time.

Alexa Bliss was very candid as she spoke on her 365 documentary special on the WWE Network about her tough luck with concussions.

“Hell In A Cell happened and I took a headlock take over and when I did, my head went straight into the mat. This stuff happens and it’s no ones fault. I had a really bad headache. I told my doctors I said, ‘Hey, something’s not right. My head just doesn’t feel right.'”

“I landed in Orlando and I took the impact test and I failed it pretty good and that’s when they diagnosed the concussion. I got called into Vince [McMahon’s] office and he said, ‘We’re going to give you time off. We’re going to send you to the best doctors and we’re going to figure out what’s going on. I want you to rest and recover because we need you to be one hundred percent.’ I started doing the concussion protocol. Start to work back, run the ropes, do the rolls, step by step until you’re able to have a match. I’m progressing, I’m doing well, I’ll be cleared for Evolution because that was my whole goal-to be cleared for Evolution [against Trish Stratus].”

“The weekend before Evolution, they wanted me to have a weekend of live events before Evolution. [Ronda Rousey and I] slipped, crashed and burned. I was in the training room, my nose was bleeding, I was crying. The doctor said, ‘I think you’re concussed.’ It’s like the process starts all over again. The day before Evolution, I was not cleared to be in the match. This is probably the match I was looking forward to the most. From the day I started in WWE I said, ‘I wanted a match with Trish Stratus.’ It’s very heartbreaking when it’s out of your control.”

Thankfully, Alexa Bliss seems to be doing much better. She’s in line for her second SmackDown Women’s Title match in a row against Bayley. It’s interesting that Bliss wasn’t able to just beat Bayley at WWE Stomping Grounds like she did on the RAW after WrestleMania, but now she gets a second shot at Extreme Rules on July 14th.