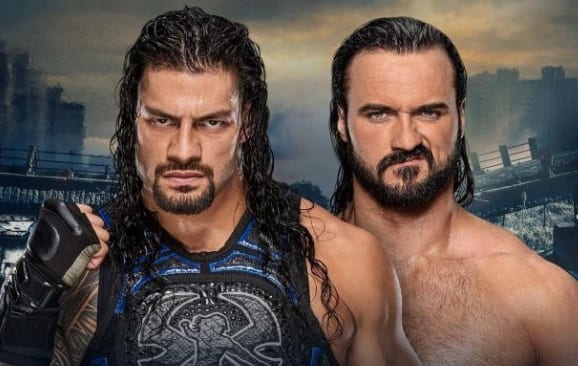 As seen on Sky Bet, the betting odds for Drew McIntyre vs Roman Reigns at WWE Stomping Grounds have been released.

McIntyre and Reigns have been battling back and forth since before WrestleMania 35, and every single time they seem to hit it out of the park. Now, though, with Shane McMahon being involved, they’ll attempt to take that next step up as their rivalry intensifies.

While many fans would probably prefer it if Shane wasn’t such a prevalent part of proceedings, there’s no doubting the fact that it’s exciting to think about what Drew and Roman are going to produce later on tonight.

The betting odds are actually much closer than many would think, with Reigns being the narrow favourite at 4/5 whereas Drew is just behind him at 10/11.

The idea that McIntyre still can’t get the job done against The Big Dog whereas Shane can is certainly doing to serve as a thorn in the side of many fans, but such is the bizarre nature of this weird and wonderful world we call professional wrestling.

This should be a pretty hard hitting encounter, and a fun one at that, but the success of the bout could depend heavily on what direction WWE decides to take things in next.

Are they going to keep pushing Drew and Shane as the top heels in the company, or will Roman end up going after Kofi Kingston and the WWE Championship? There is an endless stream of possibilities, which of course, is what we love the most.