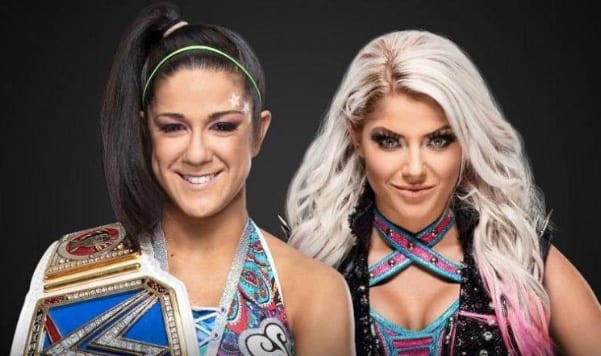 As seen on Sky Bet, the betting odds for Bayley vs Alexa Bliss at WWE Stomping Grounds have been released.

The last few weeks of build up between Bayley and Alexa Bliss have been great to watch, with both women performing at a really high level both in the ring and on the mic. Now, they’ll get the chance to settle their differences once and for all – with the SmackDown Women’s Championship being at stake.

Many consider this to be the most intriguing bout on the card, which isn’t really something a lot of people would’ve anticipated just a few short months ago.

Despite how well Bliss has been performing as of late, Bayley is still the overwhelming 1/7 favourite to get the job done at Stomping Grounds and retain her title. Alexa, on the other hand, is a 4/1 underdog to leave as champion.

We know that they’re going to put on an entertaining match either way, but in terms of upsets, we think Alexa has a better shot than most on this card at winning back the SD Women’s Title from Bayley – especially with the help of Nikki Cross.

It’s going to be a pretty tense match and we think Cross is going to play a big role in how it goes down either way, because let’s face it, she’s the real star of the show here (well, kind of). This is the match we’re most invested in, and we think the same logic applies to most fans that will be tuning in tonight.