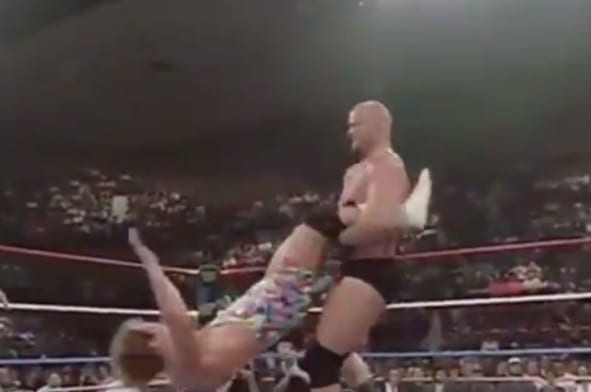 A lot of fans have long since believed that WWE superstar Cesaro deserves the chance to go after a world championship – and it’s hard to disagree with that. He is consistently positioned as a midcard talent and while that may be fine in the eyes of some, he’s got the potential to be so much more.

He first started capturing the attention of casual fans back in 2014 or so, with his Andre The Giant Memorial Battle Royal win. While it may not have done much for him in the long run, his amazing acts of strength were phenomenal and there’s no way of getting around it.

Now, in the present day, Cesaro is still waiting to prove himself in the main event scene, although there are some legends that are already more than happy to give him the praise that he deserves.

When you think of the Swiss Superman one of the key moves that comes to mind is his swing, which always winds up popping the crowd in one way or another. As it turns out, old footage has emerged of Stone Cold Steve Austin doing the very same move.

The always humble Stone Cold made sure to praise Cesaro, though, as we continue to wait for his big chance to shine.

There are plenty of deserving superstars on the main roster that should be given the opportunity to shine on the biggest stage, but there are levels to this game – and Cesaro is at the very top.