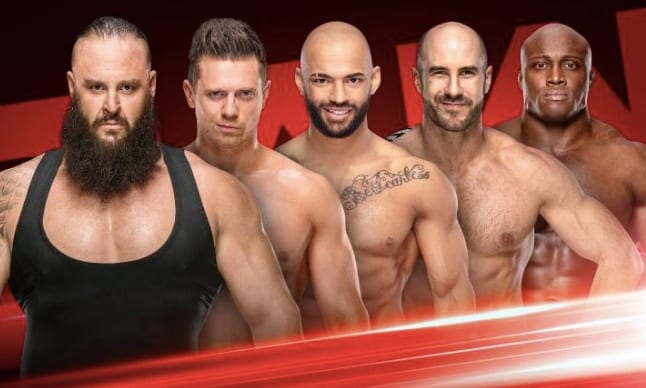 As seen on Sky Bet, the betting odds for tonight’s United States Championship number one contender’s fatal-five-way match have been released.

The United States Championship has gone through a variety of different phases over the course of the last few years, with some champions doing a good job of raising the prestige of the belt, and others failing.

Now, Samoa Joe is the man holding the gold, and it seems like he’ll be doing everything in his power to elevate it to the level it deserves to be at. That’ll continue at Stomping Grounds when he defends the championship against the winner of tonight’s number one contender’s bout on RAW.

The odds suggest that Braun Strowman is currently the 1/1 favourite to win the fatal-five-way match and book his ticket to Stomping Grounds. The second favourite is Ricochet at 6/4, closely followed by The Miz at 11/2. Cesaro and Bobby Lashley round off the odds at 8/1 and 10/1 respectively.

A lot of fans tend to believe that the majority of these individuals should be a little higher up the card. They feel like they should all be battling it out for a world championship shot in some way, shape or form, as opposed to having Baron Corbin be in that position.

Either way, it’s good that we’re getting to see them perform on a week to week basis, and in addition to that, it’s good that the US Title is going to benefit (hopefully a lot) from having such high level superstars fighting over it.