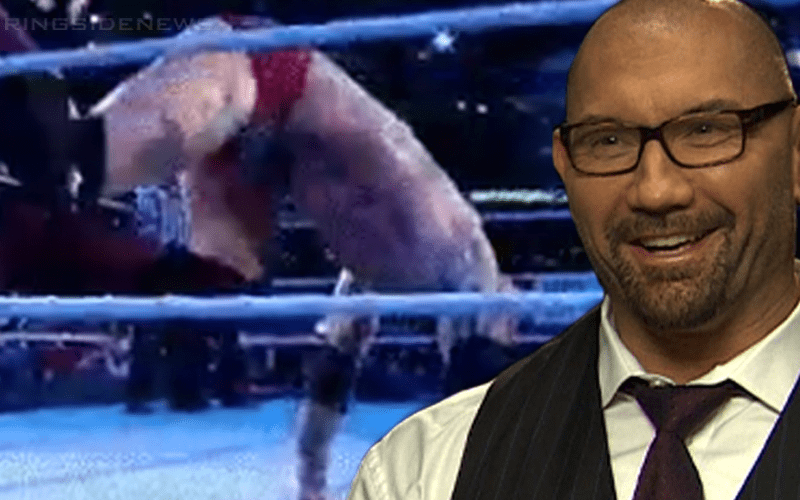 Batista is not wrestling ever again and he likes it that way. In fact, he said he’d rather go broke than wrestle again. So that pretty much settles things.

He had the last match in WWE that he wanted against Triple H. It was a very special moment because of how far the two former Evolution stable-mates go back. It turns out that Batista is also very close with Triple H’s family too.

While speaking to Chris Van Vliet, The Animal revealed that when the lights were out in MetLife Stadium, he ran over to ringside and hugged his opponent’s parents. That certainly isn’t something that every wrestler would do.

Of course, that was after he tripped while getting into the ring. However, tripping was a way to wash away the nervousness so he could just go out there and have fun in his last match.

“I tripped. I think one of my boots got stuck on the rope. There were a lot of different factors but at the end of the day, I just tripped. You know what’s funny is I was so worked up before that and after I tripped, I just had fun. I went out and I just started really living in that moment because I knew it was the last time I was going to be there. As I looked around, I saw Triple H’s parents and as soon as the lights went out I went over and I hugged them.”

“That put me at ease believe it or not, that tripping, because I was in that car a lot longer than people think that I was in that car just sitting there getting cold. Also, I warmed up like three times before I actually went out. It was a long show. So I was cooped up in that car, I got out and I was terrified, I was nervous, I was cold again and I was worried about that. I was concerned about way too much other than our match and then after I tripped it all went away.”

Batista’s final pro wrestling match was a pretty special event. He brought everything to the table that he could and left it all in the ring. Now he can focus on the rest of his career without wondering “what if” in terms of WWE. Because that book is officially closed for Drax The Destroyer.