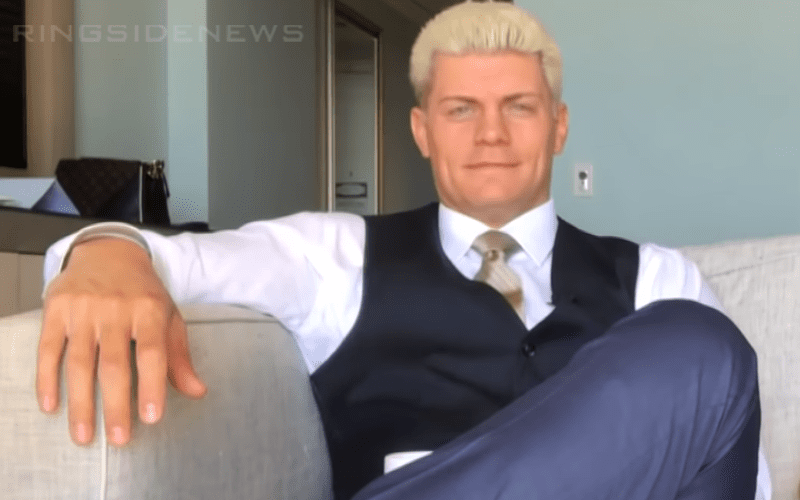 Cody Rhodes wrestled for WWE until the Stardust character just got to be too much. He wasn’t happy and he departed from the company to bet on himself. Now he’s about to go Double Or Nothing.

Rhodes hasn’t fired any shots directly at WWE and has spoken about how he wants AEW to be an alternative to WWE. However, Chris Jericho said they’re at war whether they like it or not.

While speaking to Chris Van Vliet, Cody Rhodes was asked if he’s on good terms with WWE and although The American Nightmare would like to think he is, the fact that he’s an EVP of a competing pro wrestling company is making it kind of hard.

“I would think I do but it’s dawning on me that I likely don’t if that makes any sense. I would think that we are still. I learned a lot there, I had a great time, I met my wife and I also got to wrestle some of the best. The Undertaker was still pretty active, I got to be in there with Taker.”

“Shawn Michaels was active, I got to be in there with Shawn and Hunter himself. But I don’t know maybe I’m not too well received. We were kind of always the enemy, me and my family. We were like the bastard family of wrestling. Dusty was always an individual, he never really fit into the corporate structure. He did great there and they really took care of him but I think we were always kind of the enemy.”

Cody Rhodes had a ton of experiences in WWE that he will never forget. He also learned a lot and always had his eyes open. Now he is helping AEW forge a new path and change the universe.