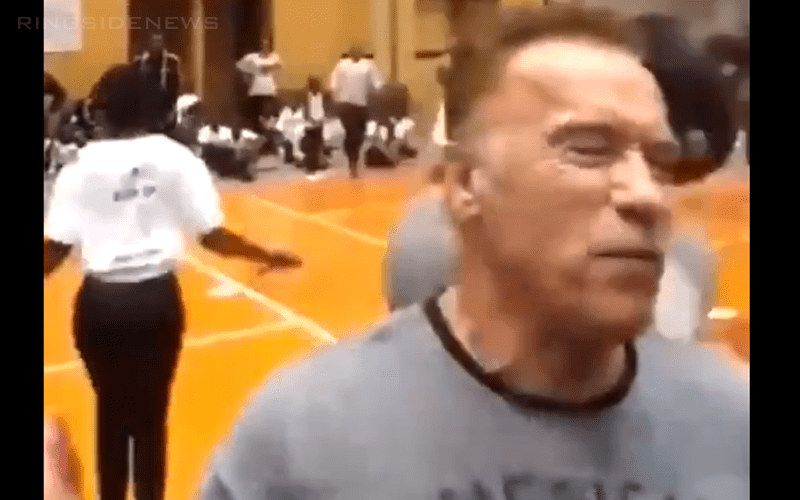 Arnold Schwarzenegger traveled to South Africa this weekend for the Arnold Sports festival. This is when someone decided that it was a good idea to run up and dropkick The Terminator in the back.

The 71-year-old WWE Hall Of Famer is okay, but it was not something he was expecting in the slightest.

Arnold no-sold the dropkick to the best of his ability, but you could certainly tell that he was irritated. So he commented that people shouldn’t be paying attention to this guy who wanted some quick attention.

Instead attention should be given to those athletes who showed up to compete today. He fired off a few tweets about the situation and it sounds like he’s just ready to move on.

Thanks for your concerns, but there is nothing to worry about. I thought I was just jostled by the crowd, which happens a lot. I only realized I was kicked when I saw the video like all of you. I’m just glad the idiot didn’t interrupt my Snapchat.

Do me a favor: instead of sharing the video of the guy who wants to be famous, watch some of our @ArnoldSports athletes like this young hero proving that fitness is for everyone who deserve to be famous. They’re on my Snapchat.

We have 90 sports here in South Africa at the @ArnoldSports, and 24,000 athletes of all ages and abilities inspiring all of us to get off the couch. Let’s put this spotlight on them.

And if you have to share the video (I get it), pick a blurry one without whatever he was yelling so he doesn’t get the spotlight.

By the way… block or charge?

As you can see from the video below, Arnold’s attacker might have regretted his decision as soon as he went through with it. Because he was roughed up a little bit for his troubles.