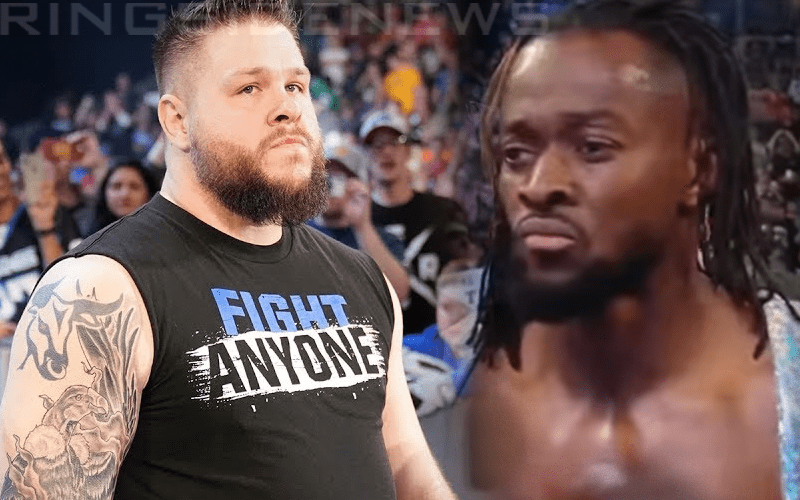 Kevin Owens is set to take on Kofi Kingston at Money In The Bank for the WWE Title. This entire match is interesting because it wasn’t supposed to happen.

WWE didn’t have Kofi Kingston in the plan for WrestleMania until Elimination Chamber when he received such a huge response. On the same token Kevin Owens was set to be a babyface, but Daniel Bryan’s WrestleMania injury caused WWE to turn KO heel and go after Kofi.

This all might have seemed to fall into place, but as Kevin Owens spoke to the State Of Combat podcast about Money In The Bank he might have acknowledged that the WrestleMania match was Kofi’s since February, but now it is Owens’ family’s turn to celebrate in the ring.

“I don’t think Kofi stepped in anybody’s way actually, because that was clearly Kofi’s match. If you just paid attention to what was going on [in] every arena, every SmackDown Live from the time he got into that gauntlet match before the Elimination Chamber to WrestleMania. To me it was obvious from that point on that it was Kofi’s match, so while it might have changed people’s plans, I wouldn’t say he got in anybody’s way because he definitely — all he did was be himself and be Kofi Kingston and that’s what got him there because the fans decided that they were getting behind him more than anybody else.”

“The only problem is, now he had his moment, everybody wants a moment. I’m no different. He has kids, he has his wife, they had a great moment, wonderful. Now I wanna have that moment. I don’t care about Kofi Kingston’s family as much as I care about mine which might be a terrible thing to say but it’s the truth. They’re great people. I’ve met them. They’re nice, they’re awesome, but now I want the moment for my kids and my wife. So now Kofi Kingston is in the way. He wasn’t before, now he is. I’m gonna do my best to get him out of the way.”

We will have to wait and see if Kevin Owens will get the job done on Sunday at Money In The Bank. It is likely to be a busy night at Ringside News as it is for every pay-per-view, but you never know if one of those stories will declare Kevin Owens as new WWE Champion.