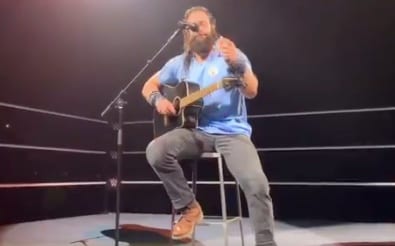 WWE superstar Elias wound up Liverpool fans in a great way during WWE’s live event in the city last night.

Liverpool went into the final game of the season yesterday knowing that they needed to beat Wolves and hope that Manchester City didn’t beat Brighton in order for them to win their first league title for 29 years. In the end, though, City were able to get the job done in emphatic fashion, winning 4-1 to confirm their back to back titles.

The Reds still have the Champions League final to get excited about in a few weeks time, but the pain of not winning the title certainly still hurt – especially just a few hours after it had actually happened.

The fact that Elias was able to rub salt into the wounds by wearing a Manchester City top is brilliant, and as you can see by the clip, it got quite the reaction.

The Drifter has gone back and forth between being a babyface and a heel in the last year or so, but to be honest, it really does feel like he’s destined to be a bad guy for a long time in WWE.

This is the kind of role he is perfect for, and to be honest, it feels as if the pinnacle of his time in WWE could go one of two ways: he could have a great one-off segment with The Rock somewhere down the line, or he could have a Honky Tonk Man-esque run with the Intercontinental Championship.