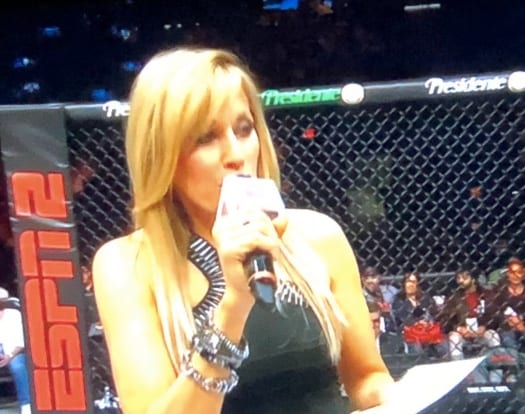 A lot of fans were intrigued by the prospect of Lilian Garcia making the transition over into mixed martial arts, and following her debut last night, it seems as if this could be a pretty great career move for her.

Garcia, who is known for her Chasing Glory podcast as well as her legendary WWE announcing career, recently announced that she would be taking on a new role as PFL’s in-cage announcer.

Last night was the Season 2 debut for PFL, and in addition to a series of fun fights, we also got the chance to see Lilian in action.

While it was far from a perfect debut that is to be expected, given how new she is to this type of role. As the shows go on, though, it really does feel like she could develop into one of the most well-rounded announcers in all of mixed martial arts.

The intriguing thing to also note is that PFL airs on ESPN, which is the same network that the UFC airs on. Whilst it’s not like they’ve got an out and out partnership going on, it’d certainly be fascinating to see if UFC are interested in her services somewhere down the road.

On the other hand Garcia might consider the possibility of returning to WWE in the future, but for the time being, it definitely feels like her future lies in MMA.

She may not be on the same level of Bruce Buffer right now, but perhaps that’ll come in time.