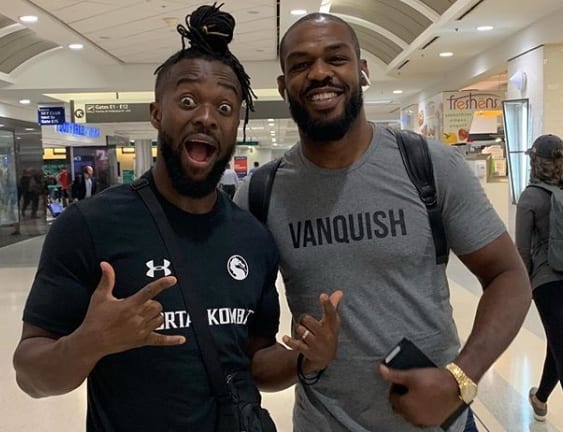 One of the things you can’t question about Kofi Kingston is his heart and determination. Those attributes have served him well over the years, and they’ve helped him get to a point where he is riding high as the WWE Champion – and enjoying that champ life in the process.

As you can see Kofi ran into UFC Light Heavyweight Champion Jon Jones in the airport last night, in what was a pretty cool meeting of the minds. Jones is currently preparing for his latest title fight against Thiago Santos, whereas Kingston is set to go one on one with Kevin Owens for the WWE Championship at Money in the Bank.

Beyond that, though, it’s great to see two guys hanging out that have both made incredible strides in order to get to the top of their respective games.

The idea of Jon Jones making his way over into the world of professional wrestling has been floated around over the course of the last few years, and it was a particularly strong possibility back in 2017. Jones had just re-captured the Light Heavyweight title from Daniel Cormier, before promptly deciding to challenge Brock Lesnar to a fight.

He then teased the idea of showing up at SummerSlam, although that didn’t wind up happening as he was instead stripped of the belt due to a positive drug test.

It doesn’t seem overly likely that he’d dip his toe back into that pool, but perhaps if he gets a few more wins under his belt he’ll start to consider it.