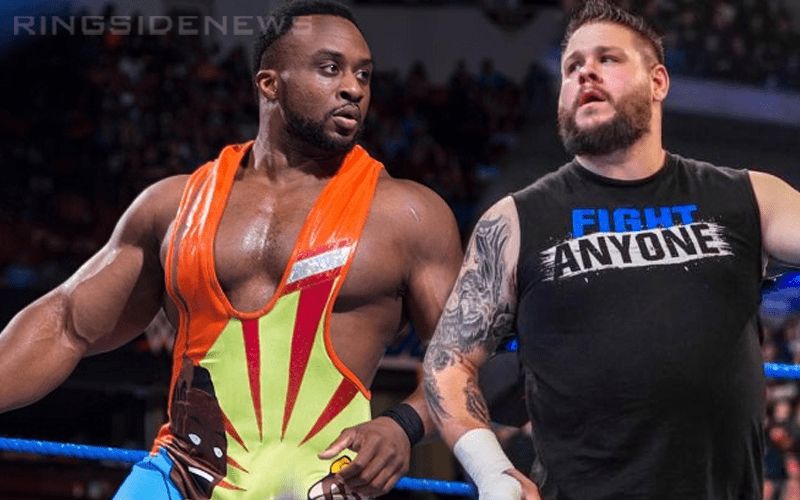 Kevin Owens is a very entertaining individual and last night was his birthday. That didn’t stop him from sticking around even after saying he was on his way home.

Kevin Owens came very close to helping Kofi Kingston lose the WWE Championship last night, but his plan didn’t work. Owens seems to be enjoying being a heel working with The New Day, but there is one member who is missing: Big E.

Just because Big E is gone doesn’t mean he’s forgotten at all. In fact, Big E’s image is still rather prominent because his picture is on WWE’s production trucks. Therefore, Kevin Owens thought this was the perfect opportunity to ask some questions to Big E in picture form.

Kayla Braxton was interviewing Owens backstage, but he didn’t want anything to do with the questions she had for him. Instead, Owens took the microphone from her and walked over to a production truck to banter with Big E’s picture. It’s also pretty hard not to notice that Dean Ambrose is still on the side of the truck too, but Owens didn’t have any questions for him.

Strangely enough, Big E and Kevin Owens’ image are right next to each other on the truck anyway. Owens said that Big E’s friends were okay with replacing him and The New Day thought replacing Big E with Kevin was funny too.

It was a pretty great one-sided interview where Owens hyped Big E’s eventual return. KO wants Big E to be angry at the New Day. After all, Owens pointed out that he and Big E are right next to each other on the truck, “so why can’t we be friends for my birthday?”