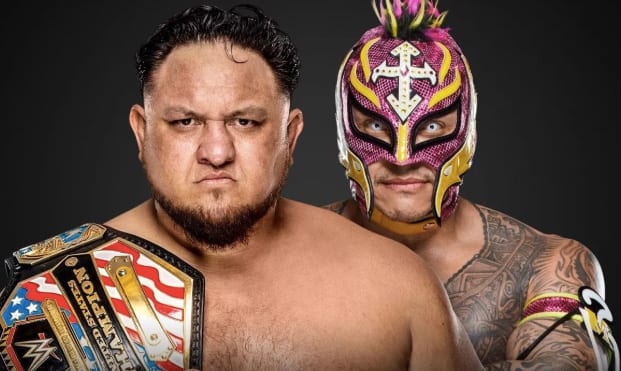 As seen on Sky Bet, the betting odds for Samoa Joe vs Rey Mysterio at Money in the Bank have been released.

The feud between Joe and Mysterio has been ongoing since before WrestleMania, but it was at the showcase of the immortals when Joe made his biggest statement in quite some time. He choked out Rey and captured the United States Championship, and he did so in pretty quick fashion.

Now, however, the rematch is on for Money in the Bank, and the rivalry has an intriguing extra layer to it now that Rey’s son Dominick has been getting involved with some of the segments. For those who don’t remember, Dominick was a central figure in Mysterio’s ‘custody’ feud with Eddie Guerrero over a decade ago.

The odds suggest that Joe is indeed the favourite to retain his title at 2/5, but with the master of the 619 only being a 7/4 underdog, there’s still a chance that he could pull off the upset.

At the very least we should get a fairly entertaining encounter between the two veterans, which is exactly what you’d expect given the contrast in their styles. One focuses on submission and power, whereas the other is an entertaining high-flyer.

It seems quite likely that Dominick will play some kind of role in the finish of the match, but then again, perhaps WWE is saving that for something bigger further down the road. Either way, the general consensus is that most folks want to see this go at least 10 minutes so we can really get a showcase of both men.