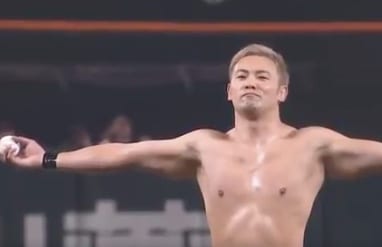 Sometimes professional wrestling can be a little bit weird, and more often than not, it can be great. Somehow, this story falls into both of those categories.

For those who don’t know, Okada is widely considered to be one of the best and most accomplished Japanese wrestlers of all time. In addition to that he’s still incredibly young, and seems to have a long time left at the top of the game.

In addition to pro wrestling the Japanese are also pretty big fans of baseball, and they’re probably only second to the United States of America in that regard. As you can see these two worlds came together recently, in the most magical of ways.

Most wrestlers who tend to do this kind of thing will show up in some casual clothing out of character, but not Kazuchika.

This man brought the title, he wore his full gear, and he had a pretty mean curveball to go alongside it too. In many ways we’d argue this is the most successful wrestling/baseball collaboration of all time (and yes, we’re including the GFW shows at baseball parks in that).

One of the big questions surrounding Okada’s career has been whether or not he’ll ever come over to WWE for an extended run, but to be perfectly honest, we don’t really think he needs to. He’s going to be set for life in his home nation of Japan, and much like Kenny Omega, he probably doesn’t trust how he’d be booked over here.