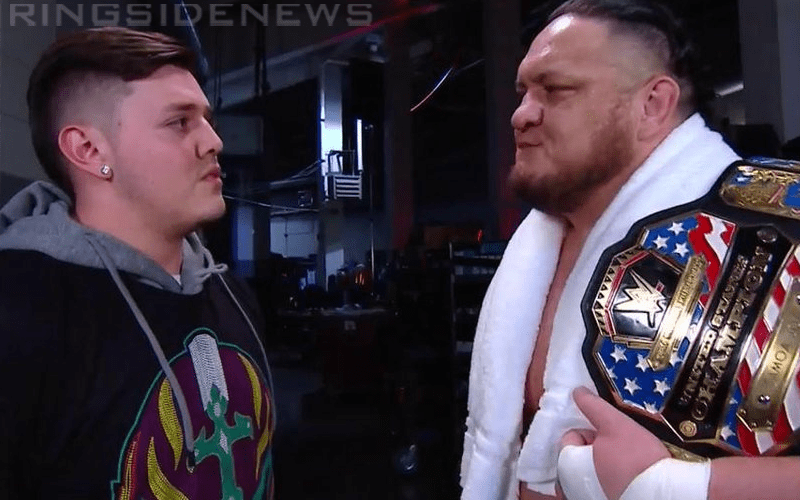 Money In The Bank is going down on May 19th and now we have one more title match to expect. Samoa Joe is the current WWE United States Champion after his successful defense at WrestleMania against Rey Mysterio. Now Mr. 6-1-9 will get another chance.

If you would like to read our entire RAW coverage for tonight’s show you can click here.

During RAW this week, they showed highlights from last week’s non-title match between Joe and Rey where Mysterio won with a roll-up pin that was very close to the ropes. Then they showed a graphic announcing that Samoa Joe will defend his WWE United States Title against Rey Mysterio on May 19th at Money In The Bank.

After they announced the match, Mysterio and Dominick were shown backstage saying hello to Heath Slater because it’s always good to see Slater. Then Rey went in the dressing room while Dominick walked the other direction before being soon followed by Samoa Joe.

Joe caught up with Dominick and said he’s glad he’s finally able to meet Dominick and he told him how he’s been there plenty of times before. He also said that Dominick went out there on RAW last week on RAW to humiliate him by celebrating with his father. Joe said Dominick did this as a way to get revenge on Joe for beating Mysterio at WrestleMania in such quick fashion.

Then Samoa Joe gave Dominick a message to tell his father that he is very much looking forward to facing him at Money In The Bank.