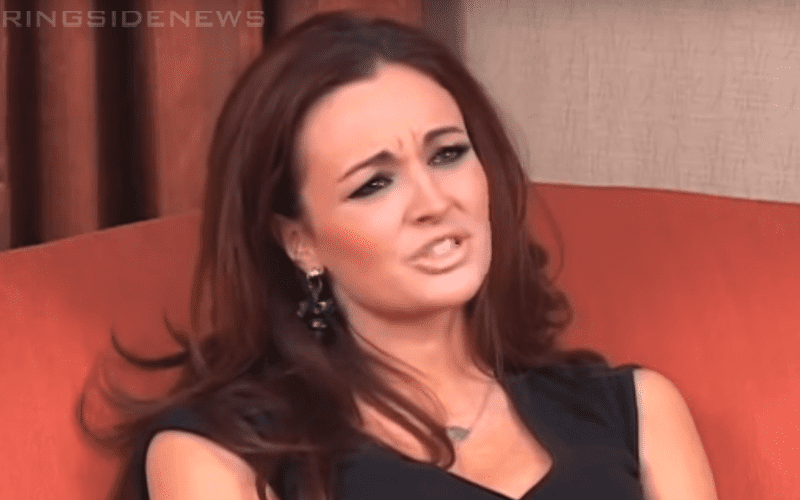 Maria Kanellis knows how to handle herself. She’s also never one to hold much back in terms of how she is feeling. Whether she’s wanting her husband to get a push in WWE or firing back at a troll, Kanellis is a great follow on Twitter.

Maria recently had it out with a right-wing troll. For some reason, this guy said: “That’s what all leftists should do,” but this might make more sense if we started from the beginning of this whole thing.

Then this right-wing troll fire back with: “You probably made him an addict.”

What happened next included a few people standing up for Maria Kanellis, but then this troll just replied with things like: “You mad cuz your parents wanted an abortion instead” and “I fingerbanged your mom’s cat last night.”

One of Maria Kanellis’ fans fire back by saying: “The first step is admitting you’re a complete loser. The next step is chugging bleach.” Then this troll replied by saying: “That’s what all leftists should do.”

Finally, Maria Kanellis fired back to stop this endless banter between her fans and this person obviously wanting attention by giving him even more attention.

Hahaha…. I’ve blocked this guy once. Now he created another account. How desperate are you? Sad, sad right wing crazy that doesn’t know what to do now that women have equal power…


This man really seemed to have gotten under Maria Kanellis’ skin and everyone else’s for that matter.

It just goes to prove that you never know what kind of person you will find in the IWC. Because sometimes there are people who are just looking to create a stir and Levi Davis certainly got a spotlight on him in this instance.

You can check out all of the Twitter posts concerning this story below.