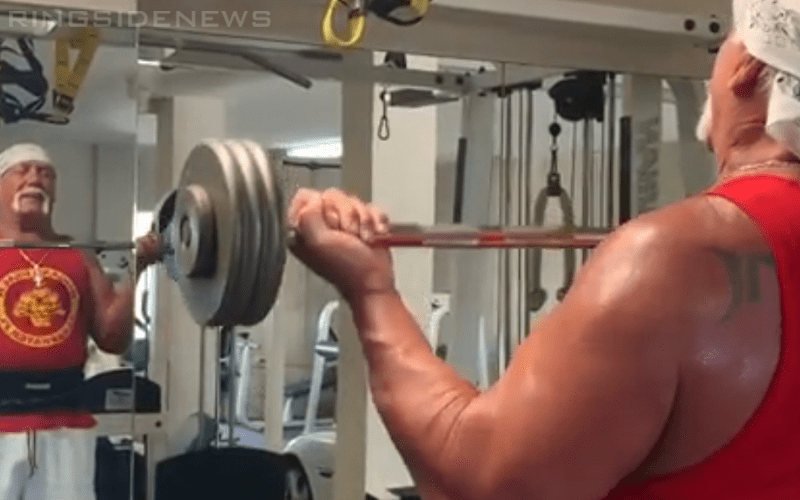 Dwayne Johnson turned 47-years-old yesterday, but good news for him is he still looks like The Rock.

Hulk Hogan was clanging and banging in his gym today and he thought that was the perfect time to throw out a birthday greeting to The Great One. Hogan’s physique really did improved between Crown Jewel and WrestleMania which is something he commented on wanting to do.

He had some pretty funny things to say to The Rock as part of his birthday greeting as well. Obviously, The Hulkster is keeping up with Johnson’s playful rivalry with Kevin Hart and is just as entertaining with it as we are.

“Happy birthday to The Rock. Woo, yes sir my favorite movie star had a birthday the other day I can’t believe Kevin Hart didn’t smash cake in his face. I was disappointed in Kevin that he couldn’t get that done, but anyway, happy birthday Rock and it doesn’t matter how old you are.”

“I’m training in the heat out of respect for The Rock, damn. Okay, happy birthday brother.”

Hogan was able to get to the end of this message without saying “brother” which is something to note as well. At 65-years-old, Hulk Hogan is also looking pretty jacked too, brother. This proves that it really doesn’t matter how old you are.

Another amazing visual is to imagine Kevin Hart’s face when Hulk Hogan name dropped him twice in this birthday message to Dwayne Johnson.

It’s belated, but happy birthday to The Rock from everyone at Ringside News.