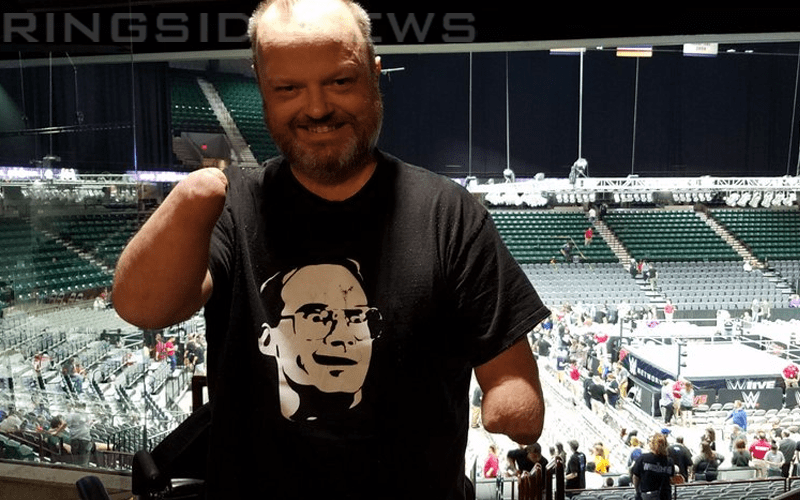 WWE likes to make sure that their audience doesn’t offend people when they are shown on television. Apparently, the company was being a bit too cautious when they allegedly kicked a fan out of the building in Moline for wearing a Jim Cornette t-shirt.

The t-shirt that this fan was wearing wasn’t even offensive. True, Cornette has some shirts with profanity on them like his famous “Thank You, F*ck You, Bye” shirt, but this was just the plain Cornette’s surprised expression face.

It didn’t help apparently because WWE ejected this fan from the event as he wrote out a brief description of the event along with a picture of him in the arena.

This was taken 30 minutes before I was asked to leave by security at last night WWE event in Moline, Illinois. I was representing Jim @TheJimCornette But I was told my shirt was offensive. They were afraid it was going to be shown on TV because the event was filmed

This fan’s name is Patrick Davis and he is handicapped. He was obviously in a wheelchair as well, but that didn’t stop WWE from kicking him out either.

Cornette replied to this saying that he has met the fan and has nothing but good things to say about him. Then Corny took it a step further and even offered to pay for this fan’s ticket for the show he missed out on.

WTF? Seriously? I’ve met Patrick, @WWE, & he has more guts than anyone & the right to wear what he wants. This was bullshit. Patrick, email me at [email protected] & I will REIMBURSE you for your WWE tix. Especially now that you know not to buy any more! #Assholes


This was a pretty cool thing for Jim Cornette to do for this fan. It still doesn’t explain why WWE didn’t want Jim Cornette’s face around their television cameras.