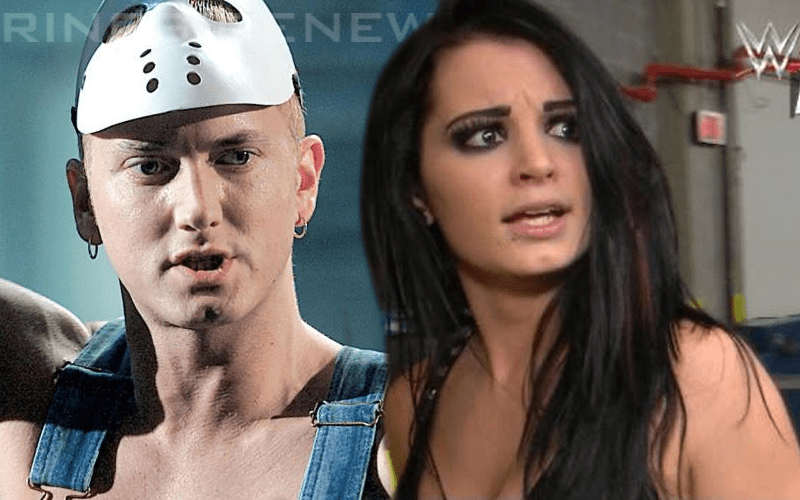 Paige was having a rather good travel experience thanks to someone blasting Eminem. Then someone on social media had to chime in and it set the first-ever NXT Women’s Champion off when she simply tried to tell the story.

The new manager of Asuka and Kairi Sane tweeted out that she was on a flight and someone was blasting their music. In what can be an unbearable experience, it was actually rather pleasant for Paige because this guy was playing Eminem.

Someone is blasting @Eminem songs on this flight right now. Obviously they don’t have headphones and have no flight etiquette but this is the one time I’m absolutely fine with their decision. Turn it upppp!

Then one fan tried to ruin Paige’s good time by serving her a little glimpse into Slim Shady’s legal history.

This comment set Paige off. She wasn’t too excited to read this comment about the fact that she was simply trying to enjoy Eminem. After all, she doesn’t care if he got popped for a little assault that he almost went to jail for. Paige was just digging Em’s musical genius.

Literally can’t post anything anymore without someone on Twitter making it negative. It’s a shame. On a side note. Look how we can make this positive..

The internet is exhausting.. Actually. Twitter is exhausting. I dunno how a lot of you have so much hate in your heart.. could literally post the most positive of things or not post anything at all and you still find ways to be negative. insane

Some people will always try and ruin your good time. Paige should understand this. It was still pretty great how she stood up for Eminem in the process though.